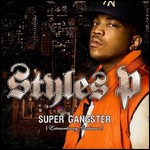 David Styles (born November 28, 1974), better known by his stage name, Styles P, is an American rapper, author, and entrepreneur. He is prominently known as a member of Hip Hop group The LOX and is also a part of the Ruff Ryders hip-hop group, and in addition has released multiple albums and mixtapes as a solo MC.

Styles P, a member of The LOX and the larger D-Block Hip-Hop collective, grew up in Yonkers, New York rapping alongside Jadakiss (Jason Phillips) and Sheek Louch (Shawn Jacobs). In their late teens the trio met Mary J. Blige who was so impressed with their tough street east coast lyrics, she gave them a big break by putting their demo in the hands of Sean Diddy Combs. Diddy immediately hired the trio to write for Bad Boy Records. With the label, The LOX quickly started collaborating on hits with Diddy, the Notorious B.I.G., Mary J. Blige, and Mariah Carey which gave them instant notoriety and status within the hip-hop and mainstream charts.

In 1996 and 1997, the group wrote and performed on a number of Diddy hits, including "It's All About the Benjamins" and "I Got the Power", Mase's "24 Hrs. to Live", Mariah Carey's "Honey", the Notorious B.I.G.'s "Last Day", and Mary J. Blige's "Cant Get You Off My Mind". In 1997 The LOX received international acclaim when their tribute to the late Biggie Smalls, "Well Always Love Big Poppa", was picked as the B-side track from Diddys No Way Out album (3x Platinum) with the number one hit, "I'll Be Missing You". This single was the most played hit in 1997, which opened the door for The LOX first solo album debut in January 1998 entitled Money, Power & Respect (Certified Platinum). Though the album was a chart toping success, The LOX felt the glossy image of Bad Boy Records conflicted with their grimier rap aesthetic and therefore cut their ties and moved on to Ruff Ryder Records. After another LOX album, We Are the Streets (2000) and appearing on albums with Ruff Ryders, Styles released his first solo album, A Gangster and a Gentleman, in 2002.[1] Four years later he released his second album Time is Money on Ruff Ryders which was followed by Super Gangster (Extraordinary Gentleman) a year later.[1] After recording many mixtapes Styles returned to the Hip-Hop scene by releasing two retail albums in 2010, The Green Ghost Project with DJ Green Lantern on Invasion Records and The Ghost Dub-Dime a retail mixtape on E1 Records (formally Koch Records). His fourth album Master of Ceremonies is a return to solo form after many years.

Styles P released his first novel Invincible in 2010[2] through Random House Publishing Group.[3] In 2011 he opened up a juice bar in Bronx, New York called Juices for Life with his business partners Nyger Rollocks and Leo Galvez.[4][5] He finished his EP with Curren$y titled, #The1st28 which was released on February 28, 2012.

This article uses material from the article Styles P from the free encyclopedia Wikipedia and it is licensed under the GNU Free Documentation License.