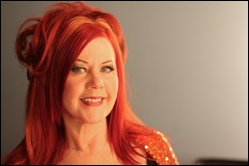 Catherine Elizabeth Pierson, better known as Kate Pierson (born April 27, 1948)[1] is an American vocalist, lyricist, and one of the singers and founding members of The B-52's. A multi-instrumentalist, she plays guitar, bass and various keyboard instruments. In the B-52s, she has performed alongside Cindy Wilson, Fred Schneider, Ricky Wilson, and Keith Strickland.

In February 2015, Pierson released her first solo album, Guitars and Microphones, featuring material co-written by Sia Furler.[2] She later released the non-album single "Better Not Sting the Bee," and on April 15, 2016 she released a cover of "Venus" as a single.

Pierson was born in Weehawken, New Jersey and raised in Rutherford.[3][4][5]

She is the owner of Kate's Lazy Desert in Landers, California, and Kate's Lazy Meadow in Mount Tremper, New York, a rustic modern lodge in New York's Catskill Mountains.[6] She operates the businesses with Monica Coleman, her partner since 2003.[7][8] On August 3, 2015, Pierson and Coleman married in a ceremony attended by the B-52's, singer Sia Furler and Furler's husband, Erik Anders Lang.[9]

Pierson has collaborated with the following bands and singers:

This article uses material from the article Kate Pierson from the free encyclopedia Wikipedia and it is licensed under the GNU Free Documentation License.