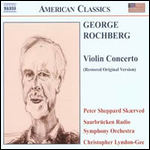 George Rochberg (July 5, 1918May 29, 2005) was an American composer of contemporary classical music. Long a serial composer, Rochberg abandoned the practice following the death of his teenage son in 1964; he claimed this compositional technique had proved inadequate to express his grief and had found it empty of expressive intent. By the 1970s, Rochberg's use of tonal passages in his music had invoked controversy among critics and fellow composers. A teacher at the University of Pennsylvania until 1983, Rochberg also served as chairman of its music department until 1968 and was named the first Annenberg Professor of the Humanities in 1978. Notable students of his include Stephen Albert, Gaston Allaire, William Bolcom, Uri Caine, Robert Carl, Daniel Dorff, Stephen Jaffe, Cynthia Cozette Lee, Yen Lu, Vincent McDermott, Michael Alec Rose, Robert Suderburg, and Maryanne Amacher.

Born in Paterson, New Jersey, Rochberg attended first the Mannes College of Music, where his teachers included George Szell and Hans Weisse, then the Curtis Institute of Music, where he studied with Rosario Scalero and Gian Carlo Menotti. He served in the United States Army in the infantry during World War II.

Rochberg served as chairman of the music department at the University of Pennsylvania until 1968 and continued to teach there until 1983. In 1978, he was named the first Annenberg Professor of the Humanities.[1] His notable students include Stephen Albert, Gaston Allaire, William Bolcom, Uri Caine, Robert Carl, Daniel Dorff, Stephen Jaffe, Cynthia Cozette Lee, Yen Lu, Vincent McDermott, Michael Alec Rose, Robert Suderburg, and Maryanne Amacher.

He married Gene Rosenfeld in 1941, and had two children, Paul and Francesca. In 1964, his son died of a brain tumor.

Rochberg died in Bryn Mawr, Pennsylvania in 2005, aged 86. Most of his works are held in the archive of the Paul Sacher Foundation in Basel, Switzerland. Some can also be found in the Music Division of the New York Public Library, the Library of Congress in Washington D.C., the Lincoln Center for the Performing Arts in New York City, New York, the University of Pennsylvania, Curtis Institute of Music, Philadelphia, and the City University of New York.

A longtime exponent of serialism, Rochberg abandoned this compositional technique upon the death of his teenage son in 1964. He said he had found serialism empty of expressive intent and that it had proved an inadequate means for him to express his grief and rage.[1] By the 1970s, Rochberg had become controversial for the use of tonal passages in his music. His use of tonality first became widely known through the String Quartet No. 3 (1972), which includes an entire set of variations that are in the style of late Beethoven. Another movement of the quartet contains passages reminiscent of the music of Gustav Mahler. This use of tonality caused critics to classify him as a neoromantic composer. He compared atonality to abstract art and tonality to concrete art and compared his artistic evolution with Philip Guston's, saying "the tension between concreteness and abstraction" is a fundamental issue for both of them (Rochberg, 1992). His music has also been described as neoconservative postmodernism (Brackett 2008, xviii).

Of the works Rochberg composed early in his career, the Symphony No. 2 (195556) stands out as an accomplished serial composition by an American composer. He is perhaps best known for his String Quartets Nos. 3-6 (197278). Rochberg conceived Nos. 4-6 as a set and named them the "Concord Quartets" after the Concord String Quartet, which premiered and recorded the works. The String Quartet No. 6 includes a set of variations on the Pachelbel Canon in D.

A few of his works were musical collages of quotations from other composers. "Contra Mortem et Tempus", for example, contains passages from Pierre Boulez, Luciano Berio, Edgard Varèse and Charles Ives.

Symphonies Nos. 1, 2, and 5, and the Violin Concerto were recorded in 2001-2002 by the Saarbrücken Radio Symphony Orchestra and conductor Christopher Lyndon Gee and released on the Naxos label.

James Freeman, musician and teacher at Swarthmore College, said this about Rochberg and Serialism, "If George Rochberg can do something like that, there's nothing that I can't do and get away with it. I don't have to write 12-tone music; I can if I want to. I can write stuff that sounds like Brahms. I can do anything I want. I'm free. And that was an extraordinary feeling in the late 1960s for young composers, I think, many of whom felt really constrained to write serial music."[2]

This article uses material from the article George Rochberg from the free encyclopedia Wikipedia and it is licensed under the GNU Free Documentation License.

Pjotr Iljitsch Tchaikovsky "Pas de deux" Nr. 14 aus dem Ballett "Der Nussknacker"
Update Required To play the media you will need to either update your browser to a recent version or update your Flash plugin.