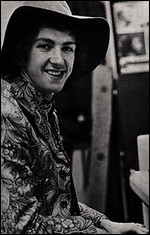 John Ronald "Mitch" Mitchell (9 July 1947 12 November 2008) was an English drummer who was best known for his work in the Jimi Hendrix Experience.

Mitchell starred in a children's television programme, Jennings and Derbyshire, when he was a teenager, and starred in a leading role in the 1960 British film Bottoms Up with Jimmy Edwards.[1] He became a musician through working at Jim Marshall's drum shop on Saturdays while still at school.[2] Early in his career, Mitchell gained considerable musical experience as a touring and session musician, working with Frankie Reid and the Casuals (1962), Johnny Harris and the Shades, The Pretty Things, Bill Knight & The Sceptres, The Riot Squad, Georgie Fame and the Blue Flames, and The Who as a session drummer while the band was in the process of replacing Doug Sandom with Keith Moon.[3]

Mitchell auditioned for Hendrix's band in October 1966, edging out drummer Aynsley Dunbar on the flip of a coin. His contribution to Hendrix's music is widely and deeply appreciated. In the studio, Hendrix would often record alone with Mitchell. On stage, the two fed off each other to exciting effect. Mitchell's ability to provide an inspiring rhythmic platform for the pre-eminent guitar groundbreaker of his day, stands alongside Ringo Starr's accomplishment of providing a vital, creative, but ultimately supportive role with the Beatles. Highly praised examples of his collaboration with Hendrix include the songs "Manic Depression", "Stepping Stone", "Little Miss Strange", "Fire", "Third Stone from the Sun", and Hendrix's signature "Voodoo Child (Slight Return)".

Mitchell came from a jazz background, and like many of his contemporaries in the London scene, was influenced by Elvin Jones, Max Roach, and Joe Morello.[4] He played in Hendrix's Experience trio from October 1966 to mid-1969, in the Woodstock band, (August 1969), and in the 1970 "Experience" version with Billy Cox on bass, known posthumously as the "Cry of Love band".

In December 1968, Mitchell played with The Dirty Mac, an all-star band assembled for The Rolling Stones Rock and Roll Circus. Others included John Lennon as vocalist and rhythm guitarist "Winston Leg-Thigh"; Yoko Ono providing improvised primal screams; Eric Clapton as guitarist, and Keith Richards as bassist. The group recorded a cover of "Yer Blues" as well as a jam called "Whole Lotta Yoko". While working with the Band of Gypsys from late 1969 until early 1970, Mitchell also collaborated with the Jack Bruce and Friends band along with ex-Cream bassist/vocalist Jack Bruce, keyboardist Mike Mandel and jazz-fusion guitarist and future The Eleventh House frontman Larry Coryell. Mitchell also took part in Miles Davis' demo sessions for the 1969 album Bitches Brew, but did not appear on the final album.

After Hendrix's death, Mitchell finished production work with engineer Eddie Kramer on incomplete Hendrix recordings, resulting in the releases The Cry of Love and Rainbow Bridge. In 1972, he teamed up with guitarists Mike Pinera and April Lawton to form Ramatam. They recorded the first of Ramatam's two albums and were Emerson, Lake & Palmer's opening act at a number of concerts. Mitchell and Hendrix had been offered spots in the band Keith Emerson and Greg Lake were forming, but Carl Palmer got the drum position instead. Ramatam never achieved commercial success and Mitchell left the act before their second LP was released. Mitchell also performed in concerts with Terry Reid, Jack Bruce, and Jeff Beck as a substitute for drummer Cozy Powell.

Mitchell drummed alongside John Halsey in the 1970's jam band, "Hinkleys Heroes", the only time he played alongside another drummer. Michael Jeffery, Hendrix's manager, relegated Mitchell and Noel Redding to paid employees without an ownership share in future revenues. This limited their earnings and led to Mitchell and Redding being largely excluded from sharing in revenues generated from the Experience. Financial hardship pressured Mitchell in the mid-1970s to sell a prized Hendrix guitar. He also sold his small legal claim to future Hendrix record sales for a sum for about $200,000. In 1974, he auditioned for Paul McCartney's band Wings, but was turned down in favour of Geoff Britton.

For the rest of the 1970s through to the 1990s, Mitchell, semi-retired and living in Europe, continued to perform and occasionally record. In 1986, Mitchell teamed up with jazz musician Greg Parker and made a music video session of Led Zeppelin's Black Dog.[5] He did session work on Junior Brown's Long Walk Back album and participated in various Hendrix-related recordings, videos, and interviews. In 1999, Mitchell was part of the Gypsy Sun Experience, along with former Hendrix bassist Billy Cox and guitarist Gary Serkin. He also appeared on Bruce Cameron's album Midnight Daydream that included Billy Cox, Buddy Miles and Jack Bruce.

In 2005, Mitchell was named the 23rd greatest drummer of all time by Rolling Stone.

In an interview with Police drummer Stewart Copeland in the late 2000s, Copeland listed the Jimi Hendrix Experience debut album Are You Experienced as his favorite drum album of all time, and relates that as a child in school, he would walk around with drum beats in his head and wonder how Mitch Mitchell would carve out a rhythm were he to play that song.

He spent his final days celebrating Hendrix's music on the 2008 Experience Hendrix Tour. For nearly four weeks the tour travelled on an 18-city tour of the US, finishing in Portland, Oregon.[6] The tour also featured Billy Cox, Buddy Guy, Jonny Lang, Robby Krieger, Kenny Wayne Shepherd, Eric Johnson, Cesar Rosas, David Hidalgo, Aerosmith's Brad Whitford, Hubert Sumlin, Chris Layton as well as Eric Gales and Mato Nanji. Five days after the tour ended Mitchell died in his sleep on 12 November, in his room at the Benson Hotel in Portland.[7][8][9] of "natural causes". Mitchell had been in ill health for many years due to alcohol-related problems. He was the last surviving member of the original Experience. Mitchell had planned to leave Portland that day to return to home in England. He was buried in Seattle.

He is survived by his wife, Dee, a daughter and two grandchildren.[10]

Jazz fusion is a lead style of playing distinguished by interplay with lead instruments such as guitar or keyboards, and the blending of jazz and rock drumming styles. Though the use of lead drums was not a new concept in jazz, it was relatively unheard of in rock. Upon joining Hendrix in late 1966, it became evident to Mitchell that the trio format of the band was similar to the recently formed Cream, and that it would allow him to become more free with his playing. Like a jazz drummer, Mitchell's playing not only provided a rhythmic support for the music, but also a source of momentum and melody. He made heavy use of snare rudiments, fast single and double stroke rolls, and jazz triplet patterns, and shifted between both traditional and matched grips. Examples of his style include the rudiment-heavy fills on "Hey Joe", which help to carry the song through a series of increasingly intense climaxes. "Manic Depression" is a 3/4 rock waltz that finds Mitchell playing a driving Afro-Cuban inspired beat, which then shifts to an explosion of triplets around the drumkit during the outro.

This article uses material from the article Mitch Mitchell from the free encyclopedia Wikipedia and it is licensed under the GNU Free Documentation License.