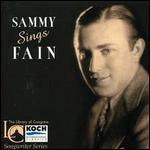 Sammy Fain, (born Samuel E. Feinberg) (June 17, 1902 – December 6, 1989) was an American composer of popular music. In the 1920s and early 1930s, he contributed numerous songs that form part of The Great American Songbook, and Broadway theatre, he was also a popular musician and vocalist

Sammy Fain was born in New York City, the son of a cantor. In 1923, Fain appeared with Artie Dunn in a short film directed by Lee De Forest filmed in DeForest's Phonofilm sound-on-film process. In 1925, Fain left the Fain-Dunn act to devote himself to music. Fain was a self-taught pianist who played by ear. He began working as a staff pianist and composer for music publisher Jack Mills.

Later, Fain worked extensively in collaboration with Irving Kahal. Together they wrote classics such as "Let a Smile Be Your Umbrella" and "You Brought a New Kind of Love to Me," (co-written with Pierre Norman) and "I'll Be Seeing You." Another lyricist who collaborated with Fain was Lew Brown, with whom he wrote "That Old Feeling". His Broadway credits also include Everybody's Welcome, Right This Way, Hellzapoppin', Flahooley, Ankles Aweigh, Christine and Something More.

Fain also composed music for more than 30 films in the 1930s, 1940s and 1950s. He was nominated for the best Original Song Oscar nine times, winning twice, with "Secret Love" from Calamity Jane in 1954 and with "Love Is a Many-Splendored Thing" from the movie of the same title in 1955. He co-wrote both songs with Paul Francis Webster, another long-time collaborator. Fain wrote the second theme to the TV series Wagon Train in 1958, which was called "(Roll Along) Wagon Train". He also contributed to the song scores for the Walt Disney animated films Alice in Wonderland, Peter Pan, and The Rescuers.

In 1963, he collaborated with Harold Adamson in writing songs for the movie The Incredible Mr. Limpet, which came out in 1964, and such songs as "I Wish I Were a Fish", "Be Careful How You Wish" and "Deep Rapture" enhanced his fame.

This article uses material from the article Sammy Fain from the free encyclopedia Wikipedia and it is licensed under the GNU Free Documentation License.