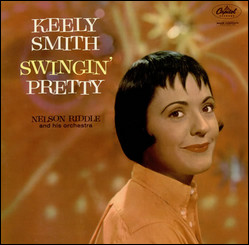 Keely Smith (born Dorothy Jacqueline Keely, March 9, 1932) is a Grammy Award-winning American jazz and popular music singer, who performed and recorded extensively in the 1950s with then-husband Louis Prima, and throughout the 1960s as a solo-artist.

Smith showed a natural aptitude for singing at a young age. At 14, she sang with a naval air station band led by Saxie Dowell. At 15, she got her first paying job with the Earl Bennett band.

She saw Louis Prima perform in New York City in 1949. When he came through Norfolk, Virginia, she auditioned. She became the calm balance to Prima's wild antics, as he made his way through a repertoire of jump blues, jazz, and Italian pop songs. They recorded together in 1949 and married in 1953.[1]

Their songs included Johnny Mercer's and Harold Arlen's "That Ol' Black Magic", which was a Top 20 hit in the US in 1958. At the 1st Annual Grammy Awards in 1959, Smith and Prima won the first Grammy for Best Performance by a Vocal Group for "That Ol' Black Magic". Her deadpan act was popular with fans. The duo followed up with the minor successes "I've Got You Under My Skin" and "Bei Mir Bist Du Schoen", a revival of the 1937 Andrews Sisters hit. Smith and Prima's act was a mainstay of the Las Vegas lounge scene for much of the 1950s. Though her actual voice was not used, she was caricatured as "Squealy Smith" in Bob Clampett's 1960 Beany and Cecil episode "So What and the Seven Whatnots," a Snow White spoof in a Vegas setting.

Smith appeared with Prima in the 1959 film, Hey Boy! Hey Girl!, singing "Fever", and also appeared in and sang on the soundtrack of the previous year's Thunder Road. Her song in Thunder Road was "Whippoorwill". Her first big solo hit was "I Wish You Love" in 1957. In 1961, Smith divorced Prima. She then signed with Reprise Records, where her musical director was Nelson Riddle. In 1965, she had Top 20 hits in the United Kingdom with an album of Beatles compositions, and a single, "You're Breaking My Heart" which reached No. 14 in April.[2]

She returned to singing in 1985, recording the album I'm in Love Again with Bud Shank and Bill Perkins.[1] Her albums, Swing, Swing, Swing (2002), Keely Sings Sinatra (2001) for which she received a Grammy nomination, and Keely Swings Count Basie Style with Strings (2002) won critical and popular acclaim.

In 1998, a Golden Palm Star on the Palm Springs Walk of Stars was dedicated to her.[3]

Smith is of Irish and Native American ancestry.[4]

In 1986, Smith faced legal problems for failing to withhold employee personal income and disability insurance taxes in connection with vending companies (including Piggy Vending) she owned in Palm Springs, California.[7][8]

With Louis Prima and Sam Butera and the Witnesses

This article uses material from the article Keely Smith from the free encyclopedia Wikipedia and it is licensed under the GNU Free Documentation License.