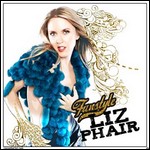 She began her career in the early 1990s by self-releasing audio cassettes under the name Girly Sound, before signing with the independent record label Matador Records. Her 1993 debut studio album Exile in Guyville was released to acclaim; it has been ranked by Rolling Stone as one of the 500 Greatest Albums of All Time. Ten years after the release of her debut, Phair's fourth album, Liz Phair, was released on Capitol Records and her music began to move in a more pop rock-oriented direction. Phair has sold nearly three million records worldwide. Her latest album, Funstyle, was released on July 3, 2010.

Phair was born in New Haven, Connecticut[1] on April 17, 1967, but raised in Cincinnati, and later Winnetka, Illinois, by upper middle-class adoptive parents, Nancy, a historian, and John Phair.[1][2] Her father was an AIDS researcher and head of infectious diseases at Northwestern Memorial Hospital; her mother, a docent who worked at the Art Institute of Chicago.[3] She graduated from New Trier High School in 1985. During high school, Phair was involved in student government, yearbook, and the cross country team, and took AP Studio Art her senior year, among many other advanced-level classes.[4] She attended Oberlin College in Oberlin, Ohio, and majored in art history.[5][6]

Phair's entry into the music industry began when she met guitarist Chris Brokaw, a member of the band Come. Brokaw was dating one of Phair's friends, and stayed at their loft in Soma one weekend. After an unsuccessful attempt to get musical traction in San Francisco, Phair returned to Chicago, where she began writing songs and recording homemade tapes under the name Girly Sound.[6] She became part of the alternative music scene in Chicago and became friends with Material Issue and Urge Overkill, two of Chicago's upstart bands to go national in the early 1990s, as well as Brad Wood and John Henderson, head of Feel Good All Over, an independent label in Chicago.[1] (A later attempt at re-recording the Girly Sound tapes failed after arguments between Henderson and Phair.)

After asking Wood who the "coolest" indie label was, Phair called up Gerard Cosloy, co-president of Matador Records, in 1992 and she asked him if he would put out her record. Coincidentally, Cosloy had just read a review of Girly Sound in Chemical Imbalance that very day and told Phair to send him a tape. Phair sent him a tape of six Girly Sound songs. Cosloy recalls: "The songs were amazing. It was a fairly primitive recording, especially compared to the resulting album. The songs were really smart, really funny, and really harrowing, sometimes all at the same time. . . . I liked it a lot and played it for everybody else. We usually don't sign people we haven't met, or heard other records by, or seen as performers. But I had a hunch, and I called her back and said O.K."

Cosloy offered a $3,000 advance, and Phair began working on a single, which turned into the 18 songs of Exile in Guyville.

Exile in Guyville was produced by Phair and Brad Wood, and released in 1993.[6] The album received uniformly excellent reviews. The album received significant critical acclaim for its very blunt, honest lyrics and for the music itself, a hybrid of indie rock and pop. The album established Phair's penchant for exploring sexually explicit lyrics such as in the song "Flower": "I want to be your blow job queen/...I'll fuck you and your minions too." By contrast, her trademark low, vibrato-less monotone voice [7] gave many of her songs a slightly detached, almost deadpan character.

The release of Phair's second album received substantial media attention and an advertising blitz. Whip-Smart debuted at #27 in 1994 and "Supernova", the first single, became a Top 10 modern rock hit, and the video was frequently featured on MTV. Phair also landed the cover of Rolling Stone with the headline "A Rock Star Is Born." Nonetheless, the album received mixed reviews, and although it was certified Gold (shipments of at least 500,000 units), it ultimately did not sell as well as expected, as it was hoped the album would introduce Phair to a wider, more mainstream audience. Following Whip-Smart, Phair released Juvenilia, a collection of some early Girly Sound tracks and several B-sides, including her cover of the 1980 song by The Vapors, "Turning Japanese".

In 1994, Phair made several live television and radio appearances in an effort to promote Exile in Guyville and Whip-Smart, including David Letterman performing "Never Said" and "Supernova" and Jay Leno performing an acoustic version of "Whip-Smart". She even performed "Alice Springs" live on Good Morning America.

In 1995, Phair married film editor Jim Staskauskas, who had worked on her videos. They had a son James Nicholas Staskauskas on December 21, 1996.[1] Phair and Staskauskas divorced in 2001.

Phair's third album, entitled Whitechocolatespaceegg, was finally released in 1998 after some delays, which included a disagreement about content; at one point, the label rejected the album as submitted, and asked Phair to write a few additional radio-friendly songs for the set.[8] The album displayed a more mature Phair, and reflected some of the ways marriage and motherhood affected her. While the single "Polyester Bride" received some airplay, and the album received many positive reviews, it was no more successful commercially than her previous records. To promote the record Phair joined Lilith Fair. Phair performed on the main stage along with acts like Sarah McLachlan, Emmylou Harris, Sheryl Crow and Missy Elliott. She also opened for Alanis Morissette on her 1999 Junkie Tour.

She portrayed the role of Brynn Allen, opposite Robin Tunney, in the film Cherish.[6][9]

In 2003, her self-titled fourth album was released on her new label, Capitol Records. Phair had not released an album in several years; she had been working on her record, as well as making guest appearances on other tracks (she lent backing vocals to the Sheryl Crow hit "Soak Up the Sun").

Initially, Phair worked on several album tracks with songwriter Michael Penn as the producer. When she submitted the finished Penn-produced album to Capitol, the label gave it a lukewarm reception and was unwilling to release it as submitted. Having already exhausted her recording budget, label president Andy Slater offered Phair more money to record only if Phair agreed to work with the production team known as The Matrix (best known as songwriters for Britney Spears and Avril Lavigne) to come up with some singles for the album. Phair's collaboration with the Matrix resulted in only four songs, but much of the media attention focused solely on the Matrix-produced tracks, which were a departure from her earlier work. The album received many negative reviews, especially from the independent music press, who accused Phair of "selling out" by making the record very pop-oriented.[10]

Liz Phair provoked a strong backlash from critics and disappointed fans of her earlier work. Many decried her for "selling out", and she became a "piñata for critics."[11] The New York Times' Meghan O'Rourke's review, titled "Liz Phair's Exile in Avril-ville", said that Phair "gushes like a teenager" and had "committed an embarrassing form of career suicide."[12]

Somebody's Miracle, Phair's fifth album (and final album with Capitol Records), was released on October 4, 2005. The album returned to a more traditional rock sound, mixing the mood of Phair's earlier work with a more mellow sound.[13] The album received mixed reviews and was not a chart success.

Phair signed with ATO Records in early 2008 and re-released Exile in Guyville on June 24, 2008.[14] Exile in Guyville was reissued on CD, vinyl, and in digital format. The special reissue package includes three never-before-released songs from the original recording sessions: "Ant in Alaska," "Say You," and an untitled instrumental. Phair has also completed a new documentary DVD, "Guyville Redux." [15] This DVD features an introduction by Dave Matthews, founder/co-owner of ATO Records, and describes the making of the album, in the male-dominated, Chicago independent music scene of the early 1990s (which included Urge Overkill, Material Issue, and Smashing Pumpkins), associated with the Wicker Park neighborhood where many of these bands often performed.

"Exile in Guyville is miles more complex than the porn-star manifesto it was often considered," said Alan Light (former editor-in-chief of Spin, Vibe, and Tracks) in an essay written for the reissue. "Phair spoke for the uncertainties facing a new generation of women, struggling to find a balance between sexual confidence and romance, between independence and isolation. . . . Exile in Guyville sat at the center of a culture in transition."[16]

In May 2009, Phair released a new song "Faith and Tenderness," sold exclusively at Banana Republic.

In recent years Phair has broadened her career by serving as a composer for television dramas. Beginning with the theme song for NBC's The Weber Show she has also worked on the CBS show Swingtown, the CW reboot of 90210, for which she won the 2009 ASCAP award for Top Television Composer, the USA Network show In Plain Sight and most recently the CW's The 100.

Phair said in an interview that she is writing a book and working on a new album.[17] On July 3, 2010, her official website announced a surprise link to download her new album Funstyle. It contains 11 songs, many of which are experimental or at least unorthodox, compared to most of her earlier songs. The song "Bollywood" was available to stream from the site for a limited time, before Phair took it down.

A note from Phair to her fans posted on her official website explained why the songs were problematic:

You were never supposed to hear these songs. These songs lost me my management, my record deal and a lot of nights of sleep.

Yes, I rapped one of them. Im as surprised as you are. But here is the thing you need to know about these songs and the ones coming next: These are all me. Love them, or hate them, but dont mistake them for anything other than an entirely personal, un-tethered-from-the-machine, free for all view of the world, refracted through my own crazy lens.

This is my journey. Ill keep sending you postcards. -Liz

Phair revealed in an interview with the Wall Street Journal that the falling out with her record label, ATO, occurred after a change in management. She explained, "The people who were still there didn’t like, or didn’t know what to do with, the music I was making, so we just stalled out and I asked to leave."[18]

Phair went on tour to promote the album, playing many songs from Guyville and Whip-Smart, along with songs from the rest of her repertoire. The Funstyle Tour ran from October 2010 to March 2011. The tour's last show took place at the SXSW festival in Austin, Texas.

Phair writes the original music for the television series The 100 on The CW network, along with Evan Frankfort and Marc Dauer.[20]

In spring of 2016, Phair supported The Smashing Pumpkins on their In Plainsong tour, performing as the opening act.[22]

In late 2015 and mid-2016, Phair stated on her Twitter that she intended to release two albums by the end of 2016.[23][24] It has been confirmed via Twitter that Phair is working on a double album, produced by fellow singer-songwriter Ryan Adams in his PAX-AM recording studio.[25]

Liz revealed on Twitter, in March, that her former label Matador Records will be rereleasing her debut album Exile In Guyville, in celebration of it's 25th year. [26] Also, as part of the CD/Vinyl remasters, would include completely remastered copies of her famed Girly-Sound tapes, from 1991. This will mark the first time that these sought-after demos will become available to the worldwide fans. As well as CD and Vinyl remasters there are also cassette tapes immitating the original, self-released tapes. These remasters will be released on May 4th.

This article uses material from the article Liz Phair from the free encyclopedia Wikipedia and it is licensed under the GNU Free Documentation License.