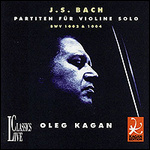 Born in Sakhalin, Kagan was brought up in Riga following his family's relocation to the Latvian Soviet Socialist Republic in 1953. He began studying at the Latvian State Conservatory in Riga at age eight under Joachim Braun; five years later, he was taken to Moscow by the well-known violinist Boris Kuznetsov. During the 1960s, he won the Sibelius and Bach Competitions, while also placing in the top-five of the Enescu and Tchaikovsky Competitions. Upon Kuznetsov's death, Kagan began studying with David Oistrakh, and in 1969, he began playing chamber music with Richter. Along with Richter and Gutman, Kagan also appeared frequently with pianist Vasily Lobanov, who would later dedicate a piece to him.

As Kagan seemed to be approaching the zenith of his career he became seriously ill with cancer in 1989. He had several surgeries, but struggled to remain active, touring Europe when he could and arranging festivals. Though his doctors at a hospital in Lübeck, Germany, declared him too sick to be released, Kagan discharged himself to appear at his final festival, in Kreuth am Tegernsee, Bavaria. Shortly after giving two Mozart concerts there, where he had to be helped on-stage, he died on July 15, 1990, not yet 44.

This article uses material from the article Oleg Kagan from the free encyclopedia Wikipedia and it is licensed under the GNU Free Documentation License.

Albert Guinovart Valses poéticos
Update Required To play the media you will need to either update your browser to a recent version or update your Flash plugin.