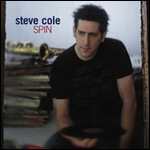 Steve Cole (born 17 August 1966) is an American tenor saxophonist who has released five albums starting in the late 1990s throughout the 2000s. Most of his albums have been well-received, earning him several awards. He is also a professor/adviser of music business at the University of St. Thomas.[1]

Cole was born in Chicago, Illinois and began to play music at a young age. At first, he trained classically, following in his father's footsteps with the clarinet before switching to the saxophone in high school. While at Northwestern University, he studied classical saxophone before changing his field to economics, eventually earning an MBA from The University of Chicago. After leaving school, Cole returned his focus to music; in particular, jazz.

In a 2003 interview with JazzNation, Cole describes how he started his career:

"I started playing pop music, R&B, be-bop, all that stuff, playing clubs in Chicago until 4 oclock in the morning for many years. You know, just doing that kind of thing, then started doing some commercial music, radio and TV stuff. Then I started thinking about getting in to some other types of music. I met some great people here in Chicago, Brian Culbertson, a guy named Bob Mamet, an Atlantic Records recording artist, a while ago, and started getting on the road and playing as a side man for those guys and eventually was able to do it on my own."

In 2000 his first solo album Stay Awhile won him the Prism Award for Best New Artist at the Oasis Smooth Jazz Awards. He was also a winner of Chicago Symphony Orchestra's annual young artists competition, allowing him the honor of performing with the orchestra.

In 2001 he hit the charts with the Grover Washington, Jr. & Bill Withers classic "Just The Two of Us" from the star-studded tribute album "To Grover, with Love", produced by renowned keyboardist/arranger/producer Jason Miles. The album eventually made # 4 on the Top Contemporary Jazz Albums. The track covered fantastically by Regina Belle, Steve Cole and George Duke is still on the playlist of many jazz radio stations and has become a jazz classic.

Cole's second album Between Us resulted in a No. 1 hit with the track Got It Goin On and the single Thursday from the album, Spin, reached the Top 20 in the radio charts. Spin was well received by critics with a score of 4.5/5.0 [Steve Cole at All Music Guide] at Allmusic - the same score held by Between Us and NY LA.[Steve Cole at All Music Guide]

This article uses material from the article Steve Cole from the free encyclopedia Wikipedia and it is licensed under the GNU Free Documentation License.