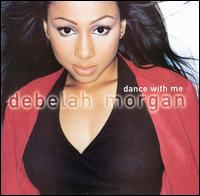 Debelah Morgan (born September 29, 1977) is an American singer and songwriter. Morgan is best known for her hit single "Dance with Me," off of her third album, which reached #8 on the Billboard Hot 100.[1]

Morgan was born in Detroit, Michigan on September 29, 1977. Her father is African-American and her mother is from India. Debelah started singing when she was eight years old as a result of listening to some classic gospel music, with some early influences by Andrae Crouch, The ONeil Twins, Shirley Caesar, Jessie Dixon and The Mighty Clouds of Joy. Gospel singer Claire Lucket Moore (sister of the gospel group Jackson Southernaires) attended her church and began working with her; developing a very creative gospel style. When she turned eleven her parents placed her with a classical voice teacher (Earlene Boyd) who taught her the foundations of great vocal technique and exposed her to Opera. At the age of fifteen, Debelah received a scholarship to study with Opera singer Faye Robinson at the University of Arizona.

In 1993, Morgan was discovered by Dedra Tate. Morgan was managed by Sandy Tate during her debut album Debelah released in 1994 by Atlantic Records. Two singles (Take it Easy and Free) successfully reached the R&B charts.

In 1997, Motown released her second album, Its Not Over on VAZ/Motown Records. Morgan was managed by Raoul Roach (son of Jazz Legend the late Max Roach). Her sophomore release featured duets with Brian McKnight and Herschel Boone. The R&B success of her single "Yesterday" landed Morgan on the R&B charts. A second single, "I Love You" was released in overseas markets such as Japan and became a hit.

In 1999, Morgan signed a music management deal with DAS Communications founder David Sonenberg. Morgan also worked with DAS manager Scot McCracken. Morgan also signed a publishing deal at EMI Music Publishing under Senior Vice President Evan Lamburg. In 2000, she signed with DAS/Atlantic Records and her record company released the single and album "Dance with Me". This song charted around the world making Morgan an international sensation. Debelah Morgan made history as the first Atlantic recording artist to debut in the Top Ten in the U.K. on both the Pop and R&B charts at the same time. This gave Morgan the exclusive opportunity to perform live on Britains TV show Top of The Pops, a show reserved only for those who debut in the Top Ten. Her success moved down under to New Zealand and Australia where "Dance With Me" went platinum in two weeks.

Morgan was the featured guest vocalist for the 2001 Goodwill Games in Brisbane, Australia. In the fall of 2001, Morgan sang with Michael Jackson and Mariah Carey on an ABC special honoring the victims of the September 11 attacks.

After the record company's promotion and touring for her third album ended, Morgan recorded two songs for the soundtrack of the movie Road Kings titled "Fly Free" and "I'll Take You There." Debelah is also featured on the Urban Renewal: Phil Collins tribute album singing Do You Remember.

Morgan contributes much of her success to the many talent and scholarship pageants she won in her early years. Morgan is a former Ms. Juneteenth, Ms Black Teen Arizona, Ms. Black Teenage World, and Ms. Arizona in Hal Jacksons talented teen international scholarship pageant. Pageant founder Hal Jackson is the first African American sports announcer. Morgan was a debutante twice in the Gospel Music Workshop of America Cotillion Pageant Ball.

Morgan's "Live" Gospel album, Let the Worship In; is one of the three gospel albums Morgan has recorded. Morgan's voice is complimented with the ability to sing in the whistle register vocal range.

This article uses material from the article Debelah Morgan from the free encyclopedia Wikipedia and it is licensed under the GNU Free Documentation License.