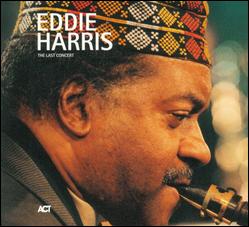 Eddie Harris (October 20, 1934 – November 5, 1996) was an American jazz musician, best known for playing tenor saxophone and for introducing the electrically amplified saxophone. He was also fluent on the electric piano and organ. His best-known compositions are "Freedom Jazz Dance", recorded and popularized by Miles Davis in 1966, and "Listen Here."[1]

Harris was born and grew up in Chicago. His father was originally from Cuba, and his mother from New Orleans. Like other successful Chicago musicians, including Nat King Cole, Dinah Washington, Clifford Jordan, Johnny Griffin, Gene Ammons, Julian Priester, and Bo Diddley (among others), young Eddie Harris studied music under Walter Dyett at DuSable High School. He later studied music at Roosevelt University, by which time he was proficient on piano, vibraphone, and tenor saxophone. While in college, he performed professionally with Gene Ammons.

After college, Harris was drafted into the United States Army and while serving in Europe, he was accepted into the 7th Army Band, which also included Don Ellis, Leo Wright, and Cedar Walton.

Leaving military service, he worked in New York City before returning to Chicago where he signed a contract with Vee Jay Records. His first album for Vee Jay, Exodus to Jazz, included his own jazz arrangement of Ernest Gold's theme from the movie Exodus. A shortened version of this track, which featured his masterful playing in the upper register of the tenor saxophone, was heavily played on radio and became the first jazz record ever to be certified gold.[2]

The single climbed into the US Billboard Hot 100 and reached No. 16 in the U.S. R&B chart. Some jazz critics, however, regarded commercial success as a sign that a jazz artist had sold out and Harris soon stopped playing "Exodus" in concert.[3] He moved to Columbia Records in 1964 and then to Atlantic Records the following year where he re-established himself. In 1965, Atlantic released The In Sound, a bop album that won back many of his detractors.

Over the next few years, he began to perform on electric piano and the electric Varitone saxophone,[1] and to perform a mixture of jazz and funk that sold well in both the jazz and rhythm and blues markets. In 1967, his album, The Electrifying Eddie Harris reached second place on the R&B charts. The album's lead track, "Listen Here", was issued as a single, climbing to No. 11 R&B and No. 45 on the Hot 100. Harris released several different versions of his composition over the years, including both studio and live concert recordings. The first appeared on an early Atlantic album, Mean Greens, featuring him on electric piano. He was to re-work the track two years later, stretching it out to over seven minutes in length, for his iconic sax solo version. The whole track appeared on both sides of the Atlantic hit single, edited into two parts.

In 1969, he performed with pianist and vocalist Les McCann at the Montreux Jazz Festival. Although the musicians had been unable to rehearse, their session was so impressive that a recording of it was released by Atlantic as Swiss Movement. This became one of the best-selling jazz albums ever, also reaching second place on the R&B charts.[4]

Harris also came up with the idea of the reed trumpet, playing one for the first time at the Newport Jazz Festival of 1970 to mostly negative critical feedback. From 1970 to 1975, he experimented with new instruments of his own invention (the reed trumpet was a trumpet with a saxophone mouthpiece, the saxobone was a saxophone with a trombone mouthpiece, and the guitorgan was a combination of guitar and organ), with singing the blues, with jazz-rock (he recorded an album with Steve Winwood, Jeff Beck, Albert Lee, Ric Grech, Zoot Money, Ian Paice and other rockers). He also started singing comic R&B/blues songs, such as "That is Why You're Overweight" and "Eddie Who?".

In 1975, however, he alienated much of his audience with his album The Reason Why I'm Talking S--t, which consisted mainly of comedy.[5] Interest in subsequent albums declined and he left Atlantic after his final album for the label in 1977, after a stay of over 12 years. He then signed for RCA Records, but his two albums there in the late 1970s were his last for a major label.

He was a member of Horace Silver's Quintet in the early 1980s and continued to record regularly well into the 1990s, sometimes in Europe where he enjoyed a loyal following, but his experimentation ended and he mainly recorded hard bop. He had moved from Chicago to Los Angeles in the mid-1970s, and was responsible for much of the music on the hit television series, The Bill Cosby Show.

This article uses material from the article Eddie Harris from the free encyclopedia Wikipedia and it is licensed under the GNU Free Documentation License.

Antonin Dvorak Adagio non troppo aus dem Cellokonzert h-moll op.104
Update Required To play the media you will need to either update your browser to a recent version or update your Flash plugin.