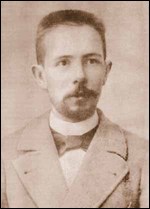 His younger brother Viktor Kalinnikov (1870-1927) was also a composer, mainly of choral music.

Kalinnikov was a policeman's son. He studied at the seminary at Oryol, becoming director of the choir there at fourteen. Later he went to the Moscow Conservatory but could not afford the tuition fees. On a scholarship he went to the Moscow Philharmonic Society School, where he received bassoon and composition lessons from Alexander Ilyinsky. He played bassoon, timpani and violin in theater orchestras and supplemented his income working as a music copyist.

In 1892, Pyotr Ilyich Tchaikovsky recommended Kalinnikov to be the director of the Maly Theater, and later that same year to the Moscow Italian Theater. However, due to his worsening tuberculosis, Kalinnikov had to resign from his theater appointments and move to the warmer southern clime of the Crimea. He lived at Yalta for the rest of his life, and it was there that he wrote the main part of his music, including his two symphonies and the incidental music for Alexey Tolstoy's Tsar Boris. Exhausted, he died of tuberculosis on January 11, 1901, just before his 35th birthday.

Thanks to Sergei Rachmaninoff's help, Tchaikovsky's publisher P. Jurgenson bought three Kalinnikov songs for 120 rubles, and later the Symphony No. 2 in A major. The Symphony No. 1 in G minor, which uses some cyclic principles, was performed in Berlin, Vienna and Moscow during his lifetime, but not published until after his death, so Jurgenson increased the fees he would have paid Kalinnikov, and paid them to his widow. He was also survived by a brother, Viktor, who composed choral music and taught at the Philharmonic School.

His reputation was established with his First Symphony, written between 1894 and 1895, which had great success when Vinogradsky conducted it at a Russian Musical Society concert in Kiev. Further performances swiftly followed, in Moscow, Vienna, Berlin, and Paris (Spencer 2001). Its themes are characteristic of Russian music.

In Russia his First Symphony remains in the repertory, and his place in musical history there is secure (Spencer 2001). On November 7, 1943, Arturo Toscanini conducted the NBC Symphony Orchestra in a rare broadcast performance of the First Symphony; although the performance was recorded, it was never commercially released by RCA Victor, but has recently appeared on Relief CR 1886 (anon. [n.d.]b, 15) and on CD Testament SBT21404 (Anon. [n.d.]c).

This article uses material from the article Vasily Kalinnikov from the free encyclopedia Wikipedia and it is licensed under the GNU Free Documentation License.