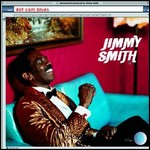 James Oscar "Jimmy" Smith (December 8, 1925[1] or 1928[2] February 8, 2005)[1][2] was an American jazz musician who achieved the rare distinction of releasing a series of instrumental jazz albums that often charted on Billboard. Smith helped popularize the Hammond B-3 electric organ, creating an indelible link between sixties soul and jazz improvisation.

In 2005, Smith was awarded the NEA Jazz Masters Award from the National Endowment for the Arts, the highest honor that the United States bestows upon jazz musicians.[3][4]

Smith's birth year is of some confusion, with various sources citing either 1925 or 1928. Born James Oscar Smith in Norristown, Pennsylvania, at the age of six he joined his father doing a song-and-dance routine in clubs. He began teaching himself to play the piano. When he was nine, Smith won a Philadelphia radio talent contest as a boogie-woogie pianist.[5] After a stint in the navy, he began furthering his musical education in 1948, with a year at Royal Hamilton College of Music, then the Leo Ornstein School of Music in Philadelphia in 1949. He began exploring the Hammond organ in 1951. From 1951 to 1954 he played piano, then organ in Philly R&B bands like Don Gardner and the Sonotones. He switched to organ permanently in 1954 after hearing Wild Bill Davis.[5][6][7]

He purchased his first Hammond organ, rented a warehouse to practice in and emerged after little more than a year. Upon hearing him playing in a Philadelphia club, Blue Note's Alfred Lion immediately signed him to the label and his second album, The Champ, quickly established Smith as a new star on the jazz scene. He was a prolific recording artist and, as a leader, dubbed The Incredible Jimmy Smith, he recorded around forty sessions for Blue Note in just eight years beginning in 1956. Albums from this period include The Sermon!, House Party, Home Cookin', Midnight Special, Back at the Chicken Shack and Prayer Meetin'.

Smith signed to the Verve label in 1962. His first album, Bashin', sold well and for the first time set Smith with a big band, led by Oliver Nelson. Further big band collaborations followed, most successfully with Lalo Schifrin for The Cat and guitarist Wes Montgomery, with whom he recorded two albums: The Dynamic Duo and Further Adventures Of Jimmy and Wes. Other notable albums from this period include Blue Bash and Organ Grinder Swing with Kenny Burrell, The Boss with George Benson, Who's Afraid of Virginia Woolf?, Got My Mojo Working, and Root Down.

During the 1950s and 1960s, Smith recorded with some of the great jazz musicians of the day such as Kenny Burrell, George Benson, Grant Green, Stanley Turrentine, Lee Morgan, Lou Donaldson, Tina Brooks, Jackie McLean, Grady Tate and Donald Bailey.

The Jimmy Smith Trio performed "When Johnny Comes Marching Home" and "The Sermon" in the 1964 film Get Yourself a College Girl.

In the 1970s, Smith opened his own supper club in Los Angeles, California, and played there regularly with guitarist Paul C Saenz, Kenny Dixon on drums, Herman Riley and John F. Phillips on saxophone; also included in the band was harmonica/flute player Stanley Behrens. The 1972 album Root Down, considered a seminal influence on later generations of funk and hip-hop musicians, was recorded live at the club, albeit with a different group of backing musicians.

Holle Thee Maxwell, then known as Holly Maxwell, was Smith's vocalist for two years in the late 1970s. During a South African tour, they recorded the album, Jimmy Plays for the People in 1978.[8]

Smith had a career revival in the 1980s and 1990s, again recording for Blue Note and Verve, and for Milestone and Elektra. Smith also recorded with other artists including Quincy Jones/Frank Sinatra, Michael Jackson (he plays on the title track of the Bad album), Dee Dee Bridgewater and Joey DeFrancesco.

His last major album, Dot Com Blues (Blue Thumb, 2000), featured many special guests such as Dr. John, B. B. King and Etta James.

Smith and his wife Lola moved to Scottsdale, Arizona, in 2004, but Lola died of cancer a few months later.[9] Smith later recorded an album, Legacy, with Joey DeFrancesco, and the two began preparation to go on tour.[10] However, before this could happen, Smith was found dead on February 8, 2005, at his Scottsdale home by his manager, Robert Clayton.[9] He was deemed to have died in his sleep of natural causes. Smith is survived by two sisters, Janet Taylor and Anita Jones; and three children, Jia, Connie and Jimmy.[11]

While the electric organ had been used in jazz by Fats Waller, Count Basie, Wild Bill Davis and others, Smith's virtuoso improvisation technique on the Hammond helped to popularize the electric organ as a jazz and blues instrument. The B3 and companion Leslie speaker produce a distinctive sound, including percussive "clicks" with each key stroke. Smith's style on fast tempo pieces combined bluesy "licks" with bebop-based single note runs. For ballads, he played walking bass lines on the bass pedals. For uptempo tunes, he would play the bass line on the lower manual and use the pedals for emphasis on the attack of certain notes, which helped to emulate the attack and sound of a string bass.

Smith influenced a constellation of jazz organists, including Jimmy McGriff, Brother Jack McDuff, Don Patterson, Richard "Groove" Holmes, Joey DeFrancesco and Larry Goldings, as well as rock keyboardists such as Jon Lord, Brian Auger and Keith Emerson. More recently, Smith influenced bands such as the Beastie Boys, who sampled the bassline from "Root Down (and Get It)" from Root Downand saluted Smith in the lyricsfor their own hit "Root Down," Medeski, Martin & Wood, and the Hayden-Eckert Ensemble. Often called the father of acid jazz, Smith lived to see that movement come to reflect Smith's organ style. In the 1990s, Smith went to Nashville, taking a break from his ongoing gigs at his Sacramento restaurant which he owned and, in Music City, Nashville, he produced, with the help of a webmaster, Dot Com Blues, his last Verve album. In 1999, Smith guested on two tracks of a live album, Incredible!, the hit from the 1960s, with his protégé, Joey DeFrancesco, a then 28-year-old organist. Smith and DeFrancesco's collaborative album Legacy was released in 2005 shortly after Smith's death.[12]

This article uses material from the article Jimmy Smith (musician) from the free encyclopedia Wikipedia and it is licensed under the GNU Free Documentation License.