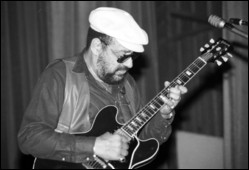 MacHouston Baker[1] (October 15, 1925 November 27, 2012), known as Mickey Baker and Mickey "Guitar" Baker, was an American guitarist. He is widely held to be a critical force in the bridging of rhythm and blues and rock and roll, along with Bo Diddley, Ike Turner, and Chuck Berry.[2]

Baker was born in Louisville, Kentucky.[3] His mother was black, and his father, whom he had never met, was believed to be white.[4] His dark complexion and red hair supports this theory.

In 1936, at the age of 11, Baker was put into an orphanage. He ran away frequently, and had to be retrieved by the staff from St. Louis, New York City, Chicago, and Pittsburgh. Eventually the orphanage quit looking for him, and at the age of 16 he stayed in New York City. He found work as a laborer and then a dishwasher. But after hanging out in the pool halls of 26th Street, he gave up work to become a full-time pool shark.

At 19, Baker decided to make a change in his life. He went back to dishwashing, and was determined to become a jazz musician. The trumpet was his first choice for an instrument, but with only $14 saved up, he could not find a pawnshop with anything but guitars for that price.[5]

He enrolled at The New York School of Music, but found the learning pace too slow. He dropped out and resolved to teach himself, but gave up shortly afterwards. Six months later he met a street guitarist who inspired him to start playing again. He continued taking private lessons from different teachers over the next few years, and, like many musicians of the day, tried to play his instrument like Charlie Parker played the saxophone.

By 1949, Baker had his own combo, and a few paying jobs. He decided to move west, but found that audiences there were not receptive to progressive jazz music. Baker was stranded without work in California when he saw a show by blues guitarist Pee Wee Crayton.[6] Baker said of the encounter:

"I asked Pee Wee, 'You mean you can make money playing that stuff on guitar?' Here he was driving a big white Eldorado and had a huge bus for his band. So I started bending strings. I was starving to death, and the blues was just a financial thing for me then."

He found a few jobs in Richmond, California, and made enough money to return to New York.[5]

After returning east, Baker began recording for Savoy, King and Atlantic Records. He did sessions with The Drifters, Ray Charles, Ivory Joe Hunter, Ruth Brown, Big Joe Turner, Louis Jordan, Coleman Hawkins, and numerous other artists.[7] During this time, Baker (along with either Paramour Crampton or Connie Kay on drums, Sam "The Man" Taylor on tenor, and Lloyd Trotman on bass) played on numerous hit records on the Atlantic, Savoy, and King labels.

Inspired by the success of Les Paul & Mary Ford, he formed the pop duo Mickey & Sylvia (with Sylvia Robinson, one of his guitar students) in the mid-1950s.[6] Together, they had a hit single with "Love Is Strange" in 1956.[6] The duo split up in the late 1950s, but sporadically worked together on additional tracks until the mid-1960s.[2]

It was around this time that he moved to France, where he worked with Ronnie Bird and Chantal Goya and made a few solo records.[2] He would remain in France for the rest of his life. Up until the end of his life, Baker was rarely without work.

Baker appeared at the 1975 version of the Roskilde Festival.

Because Baker revealed very few details about his private life, reasons for his move to France were never made completely clear. Some media sources claimed that Baker had grown tired of the business aspects of the commercial music industry in the United States, while others stated that the bi-racial Baker was angered by the growing rate of hate crimes in the southern United States during the burgeoning civil rights movement.

In 1999, Baker received a Pioneer Award from the Rhythm and Blues Foundation.

His self-tuition method book series, the Complete Course in Jazz Guitar is a mainstay for introducing students of guitar to the world of jazz. They have remained in print for over 50 years.

Baker guarded his personal life as much as possible, giving few interviews and only making sporadic public appearances. After moving to France, he rarely left the country, and made very few trips to the United States.

Baker was married six times. Among his wives were Barbara Castellano from the mid-1950s to the mid-70s, and Marie France-Drei, a singer with whom he stayed from the early 80s until his death.

Baker had two children: a son, MacHouston, Jr., and a daughter, Bonita Lee.

His guitar playing, and occasionally his voice, appeared on the following records:

This article uses material from the article Mickey Baker from the free encyclopedia Wikipedia and it is licensed under the GNU Free Documentation License.