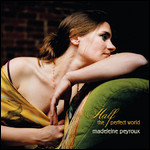 When Peyroux was six, her family moved from Georgia to Brooklyn and later southern California. At age 13 her parents divorced, and she moved with her mother to Paris.[1] In interviews, Peyroux describes her parents as "hippies" and "eccentric educators" who helped her pursue a career in music.[2] As a child, she listened to her father's old records and Peyroux learned to play her mother's ukulele.[3]

Peyroux started singing at the age of fifteen and performed with street musicians in the Latin Quarter in Paris. She joined a group called the Riverboat Shufflers. At age sixteen she joined The Lost Wandering Blues and Jazz Band and toured Europe with them.[4][5]

In 2004 she released Got You on My Mind, an EP with William Galison.[8] The same year, she released her second solo album, Careless Love, which sold over a million copies worldwide. On September 3, 2006, Peyroux performed a live session for Live from Abbey Road at Abbey Road Studios[9] and in July 2007, she was selected as Best International Jazz Artist at the BBC Jazz Awards.[10]

In June 2011, Peyroux released a new album on Decca Records, Standing on the Rooftop. The album was produced by Craig Street. The album features Marc Ribot on guitar/banjo, Me'shell Ndegeocello on bass, drummer Charley Drayton and guitarist Chris Bruce.[13]

In 2013 a New York Times music writer compared her vocal style to that of Billie Holiday, Ella Fitzgerald and Edith Piaf.[14] Peyroux's song "A Prayer" was featured in the closing credits of Season 2, Episode 7 of the television show Deadwood (2005). Peyroux's rendition of "J'Ai Deux Amours" is featured in the 2014 film Diplomacy.[15]

with The Lost Wandering Blues and Jazz Band

with The Sachal Ensemble

This article uses material from the article Madeleine Peyroux from the free encyclopedia Wikipedia and it is licensed under the GNU Free Documentation License.