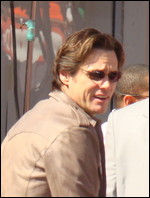 James Eugene "Jim" Carrey (born January 17, 1962) is a Canadian-American actor and stand-up comedian. Carrey is best known for his performances as multiple characters in the sketch comedy show In Living Color, as the title character in Ace Ventura: Pet Detective and Ace Ventura: When Nature Calls, as the unlucky TV reporter Bruce Nolan in Bruce Almighty, and as lawyer Fletcher Reede in Liar Liar. Carrey has also achieved critical success in dramatic roles in films such as The Truman Show, Man on the Moon, and Eternal Sunshine of the Spotless Mind. His three-decade career also includes roles in Hollywood blockbuster films such as The Mask, Dumb and Dumber, How the Grinch Stole Christmas, Lemony Snicket's A Series of Unfortunate Events, and Fun with Dick and Jane.

Over the span of his three-decade career he has won and been nominated for numerous awards, including a BAFTA nomination for Best Performance by an Actor in a Leading Role in Eternal Sunshine of the Spotless Mind as well as winning two Golden Globe Awards for his role in The Truman Show, and Man on the Moon. He also has a star on Canada's Walk of Fame.

Carrey was born in Newmarket, Ontario, the son of Kathleen (née Oram), a homemaker, and Percy Carrey, a musician and accountant.[1][2] He has three older siblings, John, Patricia, and Rita. The family was Catholic[3] and of part French Canadian ancestry (as the original surname was Carré).[4] After his family moved to Scarborough, Ontario when Carrey was 14 years old, he attended Blessed Trinity Catholic School, in North York, for two years, enrolled at Agincourt Collegiate Institute for another year, then briefly attended Northview Heights Secondary School, for the remainder of his high school career (altogether, he spent three years in Grade 10).

Carrey lived in Burlington, Ontario, for eight years and attended Aldershot High School, where he once opened for 80s new wave band Spoons. In a Hamilton Spectator interview (February 2007), Carrey remarked, "If my career in show business hadn't panned out I would probably be working today in Hamilton, Ontario at the Dofasco steel mill." When looking across the Burlington Bay toward Hamilton, he could see the mills and thought, "those were where the great jobs were."[5] At this point, he already had experience working in a science testing facility in Richmond Hill, Ontario.

In 1979, under the management of Leatrice Spevack, Carrey started doing stand-up comedy at Yuk Yuk's in Toronto, where he rose to become a headliner in February 1981, shortly after his 19th birthday. One reviewer in the Toronto Star raved that Carrey was "a genuine star coming to life."[6] In the early 1980s, Carrey moved to Los Angeles and started working at The Comedy Store, where he was noticed by comedian Rodney Dangerfield, who signed the young comedian to open Dangerfield's tour performances.

Carrey then turned his attention to the film and television industries, auditioning to be a cast member for 1980-1981 season of NBC's Saturday Night Live. Carrey was not selected for the position (although he did host the show in May 1996). Joel Schumacher had him audition for a role in D.C. Cab, though in the end, nothing ever came of it.[7] His first lead role on television was Skip Tarkenton, a young animation producer on NBC's short-lived The Duck Factory, airing from April 12, 1984, to July 11, 1984, and offering a behind-the-scenes look at the crew that produced a children's cartoon.[8]

Carrey made his film debut in Rubberface (1983), which was released as Introducing...Janet. Later that year, he won the leading role in Damian Lee's Canadian skiing comedy Copper Mountain, which included his impersonation of Sammy Davis Jr. Since the film had a less than one hour runtime consisting largely of musical performances by Rita Coolidge and Rompin' Ronnie Hawkins, it was not considered a genuine feature film. Two years later, in 1985, Carrey saw his first major starring role in the dark comedy Once Bitten, in the role of Mark Kendall, a teen virgin pursued by a 400-year old female vampire (played by Lauren Hutton). After supporting roles in films such as Peggy Sue Got Married (1986), Earth Girls Are Easy (1988), and The Dead Pool (1988), Carrey did not experience true stardom until starring in the 1994 comedy Ace Ventura: Pet Detective, which premiered only months before In Living Color ended.

Ace Ventura was panned by critics, and earned Carrey a 1995 Golden Raspberry Award nomination as Worst New Star.[9] But the film was as embraced by fans as it was derided by critics. The Ventura character became a pop icon, and the film made Carrey a superstar. It was a huge commercial success, as were his two other starring roles from that year: The Mask and Dumb and Dumber. In 1995, Carrey appeared as the Riddler in Batman Forever and reprised his role as Ace Ventura in Ace Ventura: When Nature Calls. Both films were successful at the box office and earned Carrey multi-million-dollar paychecks.

Carrey earned $20 million for his next film, The Cable Guy (directed by Ben Stiller), a record sum for a comedy actor. The film did not do well at the box office or with critics, but Carrey quickly rebounded with the successful (and lighter) Liar Liar, a return to his trademark comedy style.

Carrey took a slight pay cut to play a more serious role to star in the critically-praised[10] science-fiction dramady The Truman Show (1998), a change of pace that led to forecasts of Academy Award nominations. Although the movie was nominated for three other awards, Carrey did not personally receive a nomination, leading him to joke that "it's an honor just to be nominated...oh no," during his appearance on the Oscar telecast.[11] However, Carrey did win a Golden Globe for Best Actor in a Drama and an MTV Movie Award for Best Male Performance. That same year, Carrey appeared as a fictionalized version of himself on the final episode of Garry Shandling's The Larry Sanders Show, in which he deliberately ripped into Shandling's character.

In 1999, Carrey won the role of comedian Andy Kaufman in Man on the Moon. Despite critical acclaim, he was not nominated for an Academy Award, but again won a Best Actor Golden Globe award for the second consecutive year.

In 2000, Carrey reteamed with the Farrelly Brothers, who had directed him in Dumb and Dumber, in their comedy, Me, Myself & Irene, about a state trooper with multiple personalities who romances a woman played by Renée Zellweger. The film grossed $24 million on its opening weekend and $90 million by the end of its domestic run.

In 2003, Carrey reteamed with Tom Shadyac for the financially successful comedy Bruce Almighty. Earning over $242 million in the U.S. and over $484 million worldwide, this film became the second highest grossing live-action comedy of all time.

His performance in Eternal Sunshine of the Spotless Mind in 2004 earned high praise from critics,[12][13][14] who again predicted that Carrey would receive an Oscar nomination; the film did win for Best Original Screenplay, and co-star Kate Winslet received an Oscar nomination for her performance. (Carrey was also nominated for a sixth Golden Globe for his performance).

In 2004, he played the villainous Count Olaf in Lemony Snicket's A Series of Unfortunate Events, which was based on the popular children's novels of the same name. In 2005, Carrey starred in a remake of Fun with Dick and Jane, playing Dick, a husband who becomes a bank robber after he loses his job.

In 2007, Carrey reunited with Joel Schumacher, director of Batman Forever, for The Number 23, a psychological thriller co-starring Virginia Madsen and Danny Huston. In the film, Carrey plays a man who becomes obsessed with the number 23, after finding a book about a man with the same obsession.

Carrey has stated that he finds the prospect of reprising a character to be considerably less enticing than taking on a new role.[15] The only time he has reprised a role was with Ace Ventura. (Sequels to Bruce Almighty, Dumb and Dumber, and The Mask have all been released without Carrey's involvement.)

Despite having a 20-year career with no Academy Award nominations, Jack Nicholson (who in the first 20 years of his career had five) has named Carrey the "Jack Nicholson" of the next generation.

Carrey has been married twice, first to former actor and Comedy Store waitress Melissa Womer, with whom he has a daughter, Jane Erin Carrey[16] (b. September 6, 1987 in Los Angeles County). They were married on March 28, 1987, and were officially divorced in late 1995. After his separation from Womer in 1994, Carrey began dating his Dumb and Dumber co-star Lauren Holly. They were married on September 23, 1996; the marriage lasted less than a year. Carrey dated actress Renée Zellweger, whom he met on the set of Me, Myself & Irene, but their relationship ended in a broken engagement in December 2000. During 2004, Carrey dated his massage therapist Tiffany O. Silver.

In the May 2006 issue of Playboy Magazine (p. 48), it was mentioned that he has dated model Anine Bing. In December 2005, Carrey began dating actress/model Jenny McCarthy. The pair have since denied engagement rumors.[17] They did not make their relationship public until June 2006. She announced on The Ellen DeGeneres Show on April 2, 2008 that the two are now living together, but have no plans to marry, as they do not need a "piece of paper."

Carrey's 22-year-old daughter, Jane, is expecting her first child with rocker fiancé Alex Santana, who performs in the band Blood Money under the stage name Nitro.[18]

Carrey has a chipped tooth; for his role in Dumb and Dumber, he simply removed the tooth cap.

He attended a Presbyterian Church with his family in the early 1990s.[19] He is a fan of death metal band Cannibal Corpse,[20][21] who made a cameo appearance in Ace Ventura, at his request for the band to be featured in the film.[20] Carrey received U.S. citizenship on October 7, 2004, and now maintains dual citizenship of the U.S. and his native Canada, where he has had a star on Canada's Walk of Fame[22] in Toronto since 1998.

He went public about his bouts with depression in a November 2004 interview on 60 Minutes.[23] Carrey has made calls to the public, by way of Internet videos, to try to bring attention to the political repression in Burma, especially of Nobel Prize winner Aung San Suu Kyi, whom he describes as a personal hero.[24]

Together with Jenny McCarthy Carrey is a prominent spokesperson and activist for the Generation Rescue foundation.[25]

Wikiquote has a collection of quotations related to: Jim Carrey

This article uses material from the article Jim Carrey from the free encyclopedia Wikipedia and it is licensed under the GNU Free Documentation License.