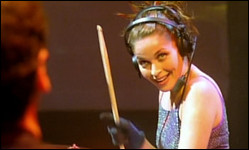 Caroline Georgina Corr MBE (born 17 March 1973), known to fans as the "Chick with Stick", is an Irish singer and drummer for the Celtic folk rock band The Corrs. In addition to the drums, Corr plays the bodhrán, cajón, percussions and piano.

The Corr siblings were appointed honorary MBEs in 2005, in recognition of their music and charitable work which has raised money for the Freeman Hospital in Newcastle, victims of the Omagh Bombing and other charities.[1][2]

Caroline was born on St. Patrick's Day (national day of Ireland) in Dundalk, County Louth on the east coast of Ireland, 50 miles north of Dublin, to Jean and Gerry Corr.[3][4] She was brought up in a Catholic household. Corr has three siblings: an elder sister Sharon Corr, elder brother Jim Corr and a younger sister Andrea Corr. She was sent to the same school, Dun Lughaidh Convent, as her sisters.

Her parents played ballads and folk tunes in local bands, and formed their own band called "Sound Affair".[5][6] Jean sang and Gerry played the keyboards and they performed covers of songs by various famous bands. Caroline and her siblings were exposed to music from a very young age, and travelled with Jean and Gerry to gigs in the family estate car.

Caroline was taught the piano by her father Gerry at a very early age like her other siblings. She also learnt the bodhrán by watching videos of traditional Irish musicians playing it. The violin was originally intended for Caroline to play but she showed no interest and instead Sharon took up violin lessons. Caroline learned to play the drums with the help of a former boyfriend who gave her lessons. From then on her drum skills were self taught. [7]

She performed No Frontiers, a cover of a Jimmy MacCarthy song, on The Corrs Unplugged along with her sister Sharon.

Corr married Frank Woods, a property developer and [8] boyfriend of many years, on 22 August 2002, in Majorca, Spain. [9] Their first child, Jake Gerard, was born in 2003. The name Gerard pays homage to their late brother, Gerard, who was hit by a car while retrieving a football in the road.[10] Their first daughter, Georgina, was born in 2004. This led to Corr taking some time off from the band's activities. In 2006, she gave birth to a girl, the couple's third child.

This article uses material from the article Caroline Corr from the free encyclopedia Wikipedia and it is licensed under the GNU Free Documentation License.