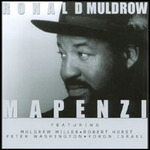 As an emerging jazz guitarist in the early 1970s, Muldrow connected with soul-jazz saxophonist Eddie Harris and contributed to many of his Atlantic albums from 1971 to 1976 and reunited with the saxophonist on Listen Here (1982).[2]

A teenage Muldrow heard jazz guitarist Wes Montgomery play "Canadian Sunset" on the radio and was captivated. His first big-time gig was with the Staple Singers, a gospel group.[3] He also taught at various colleges and had published guitar-instruction books.[4]

Muldrow began forming bands in high school and earned a bachelor's in jazz studies from Roosevelt University in Illinois and a master's in studio and jazz guitar from the USC Thornton School of Music.

This article uses material from the article Ronald Muldrow from the free encyclopedia Wikipedia and it is licensed under the GNU Free Documentation License.

Antonio Rosetti Allegro aus dem Flötenkonzert G-Dur
Update Required To play the media you will need to either update your browser to a recent version or update your Flash plugin.