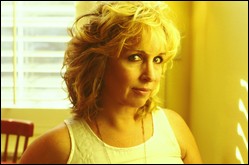 Gretchen Peters (born November 14, 1957 in Bronxville, New York) is an American singer and songwriter. She was born in New York and raised in Boulder, Colorado, but moved to Nashville in the late 1980s. There, she found work as a songwriter, composing hits for Martina McBride, Etta James, Trisha Yearwood, Patty Loveless, George Strait, Anne Murray, as well as for rock singers Neil Diamond and co-writing songs with Bryan Adams.[1] She won the Country Music Association Song Of The Year award for McBride's "Independence Day" in 1995.[2] She was twice nominated for a Grammy Award for Best Country Song, in 1995 and 1996, and was nominated for a Golden Globe for Best Original Song in 2003.

In addition, Peters has released seven studio albums of her own. The title track of her 1996 debut album The Secret of Life was later recorded by Faith Hill in 1999.

This article uses material from the article Gretchen Peters from the free encyclopedia Wikipedia and it is licensed under the GNU Free Documentation License.

György Kurtág Sonatina aus der Kantate BWV 106 „Gottes Zeit ist die allerbeste Zeit“
Update Required To play the media you will need to either update your browser to a recent version or update your Flash plugin.