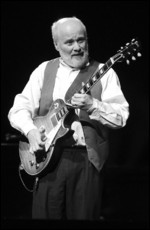 Jeremy Spencer (born 4 July 1948), is a British musician, best known as one of the first guitarists in Fleetwood Mac.

Spencer was born in Hartlepool, County Durham. He grew up in South London and was educated at Strand School, where he became known for hilarious impressions of the headmaster and several of his staff.

Spencer's speciality later became the slide guitar. He was strongly influenced by the blues musician Elmore James. He joined Fleetwood Mac in July 1967 and remained with the band until February 1971, when he joined a Christian cult called the Children of God, now known as the Family International, of which he is still a follower.

In the summer of 1967 Spencer came to the attention of ex-Bluesbreakers guitarist Peter Green, who was looking for another musician to join him in his new Fleetwood Mac project. Green had recruited drummer Mick Fleetwood and temporary bassist Bob Brunning, and wanted a second guitar player to fill out the sound onstage. Spencer was then playing with blues trio The Levi Set, and was already an accomplished slide guitarist and pianist. He fitted in well, and soon after his arrival the band's intended bassist John McVie eventually joined.

This line-up of Fleetwood Mac recorded two albums of traditional blues songs, with Spencer contributing many variations on the Elmore James theme, particularly centred around James' version of "Dust My Broom", plus a few songs of his own. Green became frustrated because Spencer did not seem willing to contribute to Green's songs, whereas Green always played on Spencer's recordings where necessary.[1] Since Spencer's musical contributions to the band were too narrowly focused, Green and Fleetwood brought in a third guitarist, 18 year-old Danny Kirwan, after 1968's Mr. Wonderful. This album featured several of Spencer's Elmore James tunes.

Green and Kirwan found that they worked well together musically, quickly developing the style that provided hits such as "Albatross", "Man of the World" and "Oh Well", none of which featured Spencer. Spencer found himself slightly isolated within the band, and chose to contribute very little to the band's third album Then Play On. It was intended to complement this album with a separate EP of Spencer's work, but this never materialised. In the end, his input amounted to some piano on Green's neo-classical epic "Oh Well Pt. 2".

On stage however, Spencer was certainly an integral part of the band, with a raucous routine of old blues songs which were extremely popular with audiences. Spencer was an incredibly gifted mimic, providing excellent impersonations of Elvis Presley, Buddy Holly, John Mayall and whoever else he felt like sending up at the time. He was also often given to occasional suggestive behaviour onstage, particularly at early concerts, which sometimes landed the band in trouble with promoters and venue owners, and got them banned from London's Marquee Club.[2] This wild onstage atmosphere was caught in Spencer's recording "Someone's Gonna Get Their Head Kicked In Tonite", which was chosen as the B-side to the gentle "Man of the World" single in 1969.

Away from the stage, Spencer was often quiet and withdrawn, and other band members recall him often reading the Bible in his hotel room, strongly at odds with his on-stage persona.[3]

Spencer became the first member of Fleetwood Mac to release a solo album, simply titled Jeremy Spencer, in 1970. This album featured many 1950s parodies and amusing songs but was not a success. It has not yet been officially released on CD.

When Green left Fleetwood Mac in mid-1970, the band were in a state of flux and there was a possibility of not continuing. However, the band held together, and both Spencer and Kirwan worked on new songs, which appeared on the Kiln House album released in the late summer of 1970. For the first time, the defining Elmore James songs were absent on Kiln House, instead this album featured more of Spencer's 1950s parodies, including the Buddy Holly tribute "Buddy's Song". Another song, "One Together", touched on the many different personas that Spencer used onstage.[3]

During a tour of the United States in February 1971 with new keyboardist Christine McVie now having joined the band, Spencer grew disillusioned with his life in Fleetwood Mac, and has mentioned in several interviews an incident when the band were listening to a recording of an old concert. When he heard himself singing, he said "That sounds horrible. It sounds like shit."[2] According to one account by Mick Fleetwood, Spencer apparently had difficulty recovering from a mescaline trip he had experienced very early on the US tour. Shortly before a journey of the band from San Francisco to Los Angeles, LA experienced a major earthquake. Being in a fragile mental state and filled with strong negative premonitions, Spencer was very apprehensive about having to travel to LA. He unsuccessfully pleaded with Fleetwood to cancel this leg of the tour.[4] Shortly after arriving in LA on the day of a gig the group was scheduled to perform at the Whiskey A Go Go, Spencer left the hotel room he shared with Fleetwood to visit a bookshop on Hollywood Boulevard. He did not return, forcing the cancellation of that evening's concert while the band and members of their entourage went searching for him. Some days later, he was found to have joined the religious group the Children of God, and he declared that he no longer wanted to be involved with Fleetwood Mac. Despite appeals from the band's manager, Clifford Davis, to fulfil his obligations to Fleetwood Mac, Spencer could not be persuaded to rejoin the band, and thus they had to struggle on without him, first recalling Peter Green out of retirement as an emergency measure, and later recruiting new guitarist Bob Welch.[4]

Despite many rumours of brainwashing and forced induction into the organisation, Spencer has always maintained that he joined the organisation of his own free will. He had been approached by a young man named Apollos, who engaged Spencer in conversation about God, and invited him to a nearby mission where other members were staying. During the evening, Spencer became convinced that this change of direction was the best course for him to take, and by the time Fleetwood Mac found him, his mind was made up.[5] Despite his continued confidence that he made the right choice, he has said that the manner of his departure from the band was regrettable: "The way I left was wrong and a mistake. I should've told them right away but I was desperate."[6]

Spencer and his then-wife Fiona moved to the USA to settle in with the Children of God, and he soon formed a new band within the organisation and played free concerts around the country. An album was recorded, Jeremy Spencer and the Children, although without any commercial success. Relatively little is known about this period of his life, but he travelled the world recording a considerable amount of music for the purposes of the organisation, and spent time living in Brazil and Italy.[6]

In 1979, he recorded the album Flee with the newly-formed Jeremy Spencer Band, again without commercial success. During the 1980s he was living in the Philippines, where he met his current partner, a German woman named Julie.[6] During the 1990s he worked in India doing charity concerts, and some recordings from these gigs were available for download from his website. Spencer now lives in Ireland and still works for the Children of God (now called the Family International), mainly as a book illustrator and story writer.[6] He has always continued to play music, often just for his own amusement, but recently he has appeared at various blues and gospel conventions, and in 2006 he released a new album, Precious Little, which was recorded in Norway. The album showed a return to the blues and the slide guitar style that he became famous for whilst he was with Fleetwood Mac, albeit with a more gentle touch.

He was inducted into the Rock and Roll Hall of Fame in 1998 for his work as part of Fleetwood Mac.

More recently, Spencer was in contact with his former Fleetwood Mac bandmates Mick Fleetwood and John McVie, and according to McVie, the three had informal jam sessions with Rick Vito at Fleetwood's home.[7] Spencer also took part in the TV documentary 'Peter Green. Man of the World'[8], in which he was interviewed together with John McVie and Mick Fleetwood.

Spencer has many children of various ages, and some of them have formed a band in England called JYNXT. The band members are Nat, Koa, Tally, and Rick Spencer.

This article uses material from the article Jeremy Spencer from the free encyclopedia Wikipedia and it is licensed under the GNU Free Documentation License.