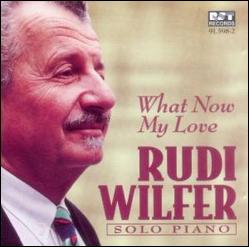 Rudi Wilfer (born September 14, 1936) is an Austrian pianist and composer.

Rudi Wilfer was born in 1936 in Vienna and grew up there. He studied at the Vienna Academy of Music and Performing Arts, majoring in trumpet and piano, and then went on to study composition and notation at the Vienna Municipal Conservatory. Despite his many talents, it was the piano that became his principal musical interest. Over the course of his long career, Rudi Wilfer has played with such greats as Uzzi Foerster, Fatty Georges, Eich Kleinschuster, Clifford Jordan and Friedrich Gulda, with whom he shared both a rich professional relationship and a close personal friendship. As the leader of his own ensemble, Rudi Wilfer helped shape the course of jazz history. His musical career began in the Vienna of the 50s, where he joined the formation headed by the world-famous clarinetist Fatty Georges, taking over from pianist Joe Zawinul who had relocated to New York.

At the time, "Fatty´s Saloon" was considered one of the worlds finest jazz clubs. Duke Ellington once famously remarked: I´ve never seen a club like this in the whole world. Here, Rudi Wilfer was given the opportunity to share stages with some of the greatest living jazz artists for whom Vienna was an important stop on their European tours. Over the years, he played and became friends with such stars as Count Bassie, Louis Armstrong, Duke Ellington, Ella Fitzgerald, Lionel Hampton, Quincy Jones, Art Blakey, Stanz Getz, Jimmy Heath and many more, at times adding his influence to their own musical development. The 70's saw the formation of the legendary Rudi Wilfer Trio which created many popular recordings, some featuring his own original works, which were produced in cooperation with Austrian National Radio and frequently broadcast on its fledgling OE3 channel. One of Rudi Wilfers career highlights was his membership in the Leo Wright and Carmell Jones Quintett in Berlin which he joined in 1970. He was also in demand as an accompanist for artists such as Slide Hampton (trombone), Billy Mitchel (tenor sax), Harold Jones (drums), Art Farmer (trumpet), and many more. The famous arranger and saxophonist Oliver Nelson invited Rudi Wilfer to join his famous Berlin Dream Band.

He later described working with these Afro-American artists as some of his most inspiring moments as a musician. In 1973, Rudi Wilfer won first prize at the International Jazz Theme Festival "Concours international de composition de theme de jazz in Monaco for a composition he had dedicated to his life-long friend Joe Zawinul, entitled "For Joe. The award proved to be a breakthrough moment for him, leading directly to new radio and TV productions and a number of highly successful tours together with such accomplished musicians as tenor sax player Bud Freeman and Eddie Lockjaw Davis. His first tour of the U.S. led to a meeting with pianist Bill Evans, whom he had admired for many years.

In 1981, Rudi Wilfer published his first major work of sacral music, the "St. Michael Mass" which was first performed by conductor Erwin Ortner together with the Arnold Schoenberg Choir and the Austrian Radio Orchestra in the Church of Don Bosco in Vienna. This was followed in 1982 by the first performance of his organ concerto Stalagtites in the Church of St. Augustine in Vienna. The same year, Rudi Wilfer became professor for jazz piano and improvisation at the Vienna Municipal Conservatory where he profoundly influenced an entire generation of young jazz musicians.

In 1983 his composition "For Peace was performed at the Salzburg Festival Theater. A year later, in 1984, be began work on his first opera, entitled Christian. Rudi Wilfer continued to perform together with some of the most famous visiting jazz soloists from around the world, including the American trumpet player Lee Harper, Austrian guitarists Harry Stojka and Karl Ratzer, the Hungarian bass virtuoso Aladár Pege, and the Vienna-born sax player Karl Drewo, with whom he produced a collection of albums.

On September 17, 2001, Rudi WIlfer was awarded the Grand Cross of the State of Salzburg for his life achievements.

Among his fellow musicians, Rudi Wilfer is often been considered a slightly controversial figure; an individualist and a maverick, but above all a swinging virtuoso capable of transitioning as a soloist seamlessly into the word of classical music, but always remaining true to his deep roots in jazz. In 2007, Rudi Wilfer released a solo album, entitled Alone.

In 2008, he was awarded the Austrian Cross of Honor for Art and Science.

Following the death of his friend Joe Zawinul, he composed the Requiem for Joe Zawinul in his honor. It was first performed in 2009. In recent years Rudi Wilfer has worked closely with his son, the talented jazz violinist Felix Wilfer. The two have played together in numerous concerts both at home and abroad, including a U.S. tour in 2010. Rudi Wilfer has composed a number of chamber pieces for this ensemble.

In 2013, his latest CD, entitled 'wilfer & wilfer live im Odeion' was released. Thanks to his rare versatility and his acclaimed musical virtuosity, Rudi Wilfer has succeeded in becoming a living legend among his peers, as well as a major source of inspiration and enjoyment for generations of jazz lovers around the world.

This article uses material from the article Rudi Wilfer from the free encyclopedia Wikipedia and it is licensed under the GNU Free Documentation License.