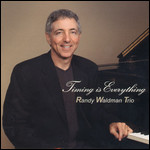 Randy Waldman (born September 8, 1955 in Chicago, Illinois) is a Grammy Award-winning American pianist, arranger, composer and conductor.[1] He is also an airplane and helicopter pilot and holds a 2003 flight speed record in a Bell OH-58 helicopter.[2]

Waldman began playing piano at age five, was hired to demonstrate pianos at a local piano store at age 12, and performed with the Northwestern University band while still in high school.[1] At the age of 21, he was hired to go on tour as the pianist for Frank Sinatra.

The Lettermen then hired Waldman to go on tour from Chicago to Los Angeles, whereupon he decided to make Los Angeles his home. Within his first year of relocating to the west coast, Waldman toured with Minnie Riperton, Lou Rawls, Paul Anka, and George Benson, the latter of whom hired Waldman to be his musical director and arranger for the next seven years.[1]

In 1977, the word started to spread about Waldman in the Los Angeles studio scene, launching a prolific session career spanning over 30 years. He has performed on hundreds of albums, motion picture soundtracks, and jingles.[1] Concurrently, Waldman branched into songwriting, arranging and producing on soundtracks such as Weekend at Bernie's, Salsa and Nuts.[3]

In 1983, Waldman was nominated for a Grammy for Best Vocal Arrangement for The Manhattan Transfer's "Code of Ethics", from their album Bodies and Souls. A few years later, Waldman's co-arrangement of the West Side Story song "Somewhere", on Barbra Streisand's The Broadway Album, won a Grammy in 1985.[1] Waldman has been Streisands pianist for over 20 years and is featured on all her albums, movies and live performances.

After many years working on other artists' albums, Waldman decided to release his own work. In 1998, Waldman released his first solo album, Wigged Out, featuring bassist John Pattitucci and drummer Vinnie Colaiuta. He subsequently signed to Concord Jazz and issued the follow-up, Unreel, in 2001 and Timing Is Everything, in 2003.[1]

This article uses material from the article Randy Waldman from the free encyclopedia Wikipedia and it is licensed under the GNU Free Documentation License.

Wolfgang Amadeus Mozart "Un bacio di mano", Arietta KV 541
Update Required To play the media you will need to either update your browser to a recent version or update your Flash plugin.