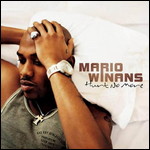 Born Mario Brown, he is the son of gospel recording artist Vickie Winans (née Bowman) and her first husband, Bishop Ronald Brown. He is also the stepson of his mother's second husband, gospel singer, Pastor Marvin Winans whom she married in 1978. Marvin and Vickie Winans had a son, Marvin Winans Jr. (Mario's half brother.) Vickie and Marvin Winans divorced in 1995 and she has since remarried.

Mario Winans began learning piano, keyboards, and drums while still in grade school in Detroit and learned how to work in a recording studio at an early age. He began producing gospel music professionally after graduating high school, eventually working with gospel music artists Fred Hammond, The Clark Sisters and various members of the Winans gospel music family. But unlike the rest of his family who stuck with gospel, Mario also delved into secular music.

In the mid-1990s, Mario was signed to a production deal with Dallas Austin's Rowdy Records thru producers Tim & Bob. He lived with the duo at their house studio until his breakthrough came as a Christian songwriter, musician and co-producer on R. Kelly's "I Can't Sleep Baby" and "You Remind Me Of Something" (plus three more songs) from the R. Kelly album in 1995. He also worked with Pebbles and 98 Degrees.

Winans eventually released his debut album Story of my Heart on Motown in 1997. While the song "Don't Know" reached the US R&B top 50, the album failed to chart.

Soon after, Winans teamed up with P. Diddy and his Bad Boy roster, playing drums on "Come With Me" by Diddy and Jimmy Page, based on the classic Led Zeppelin song "Kashmir" from their 1975 album Physical Graffiti.

Winans co-wrote the 2-part song "I Need a Girl" with P. Diddy and appeared on the "Pt. 2" version with Loon, Ginuwine, and Diddy, which became a hit recording in 2002. He also produced the Bad Boy remix compilation We Invented The Remix in 2002.

Winans recorded his second album Hurt No More in 2001, 2002, and 2003 in between his busy schedule working with other artists. The album is based on stories of love and betrayal.

The first single "I Don't Wanna Know" was based on a sample of the Fugees' 1996 hit single "Ready Or Not", which itself was based on a slowed-down sample of the instrumental track "Boadicea" by Enya from her 1987 self-titled album. Enya and her representatives became angry since Winans did not seek her approval for the sample, as he was unaware that the Fugees sample he had used had itself been a sample. So, a compromise was reached to credit the single as "Mario Winans featuring P. Diddy and Enya".[1] The song features a rap by P. Diddy and radio programmers and club DJs started playing the track when it started appearing on mixtapes. The song was released as the single in early 2004 and became a worldwide hit going to #1 in Germany and on the rhythmic top 40 radio chart in the United States; to #2 on the Billboard Hot 100, on the US R&B/Hip-Hop singles chart, and on the world internet download charts; and to #3 on a composite world R&B chart (based on the R&B charts in the US, UK, Germany, France, and Australia) and on both the Australian and Norwegian singles charts. It also reached the top ten on a composite European singles chart.

The album's second single, "Never Really Was", used a sample of the orchestrated beginning of Madonna's 1986 hit, "Papa Don't Preach", as its background music. However, the song failed to chart in America. A remix version was released as a single featuring rapper Lil Flip.

The song "This is the Thanks I Get" began to chart on billboard and was stated to be the album's third and final single but no official release was set. The song went on to peak on Billboards R&B Chart at #112.

Winans appeared on Diddy's album, Press Play producing, writing and singing on "Through The Pain (She Told Me)" and the hit single "Last Night" with Keyshia Cole. "Last Night" was originally intended for his own album, which he had apparently been recording for release in 2007, this never occurred.

Winans also recently executive produced Diddy's new Dirty Money album "Last Train To Paris" which was released in late 2010 and Trey Songz' 2010 single "Can't Be Friends" which has topped the American R'n'B charts for over 10 weeks.

In May 2011, Winans stated that his third studio album titled "My Purpose" would be released in the Summer of 2011.

This article uses material from the article Mario Winans from the free encyclopedia Wikipedia and it is licensed under the GNU Free Documentation License.