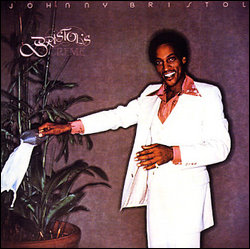 John William "Johnny" Bristol (February 3, 1939 March 21, 2004),[1] was an American musician, most famous as a songwriter and record producer for the Motown label in the late 1960s and early 1970s. He was a native of Morganton, North Carolina, about which he wrote an eponymous song.[1]

Bristol first came to local attention in the Detroit area as a member of the soul duo 'Johnny & Jackey' with Jackey Beavers,[1] an associate Bristol met while in the US Air Force. The pair recorded two singles in 1959 for Anna Records, a label owned by Gwen Gordy (Berry Gordy's sister) and Billy Davis and four 45s for Gwen Gordy and Harvey Fuqua's Tri-Phi label, none of which was a success beyond the Midwestern United States.

In the mid 1960s, Motown had absorbed Tri-Phi and Bristol began working with Fuqua as a songwriter and producer. Among their successes as producers were hit singles such as Marvin Gaye and Tammi Terrell's "Ain't No Mountain High Enough" (1967), "Your Precious Love" (1967), and "If I Could Build My Whole World Around You" (1968); Edwin Starr's "Twenty-Five Miles" (1969); and David Ruffin's "My Whole World Ended (The Moment You Left Me)" (1969).

Notably, Bristol was the producer and co-writer of the final singles for both Diana Ross & the Supremes and Smokey Robinson & the Miracles, before each group lost its namesake lead singer. While the Miracles' "We've Come Too Far to End It Now" (1972) was an original, the Supremes' "Someday We'll Be Together" (1969) was a cover version of a Johnny & Jackey single from 1961.[2] Bristol is the male voice on the Supremes' version of "Someday We'll Be Together," singing response to Diana Ross' lead vocal[2] (Ross actually recorded the song as her initial solo release with session singers The Waters Sisters).

Bristol left Motown in 1973 to join CBS as a producer. He worked with a number of emerging singers that included Randy Crawford, for whom Bristol wrote "Caught in Love's Triangle", as well as producing established performers such as Marlena Shaw, Johnny Mathis and Boz Scaggs. Now in his early 30s, he was anxious to resume his own recording career, and when CBS/Columbia showed little enthusiasm he signed a recording contract with MGM.

Bristol then recorded two albums for Atlantic, Bristol's Creme (1976) and Strangers (1978). One track from the Atlantic period, "Strangers In The Dark Corners," has become popular on the European rare-soul scene. He maintained a parallel role as a producer during this period, working mainly for artists signed to Columbia Records, including Boz Scaggs. Bristol can be credited with creating Scaggs' blue-eyed soul sound for the Slow Dancer album (1974). Bristol also produced Tom Jones' 1975 album, Memories Don't Leave Like People Do, which included five covers of Bristol's songs, including the title track. He continued to be held in high regard as a producer, and some of the other acts with whom he worked included Tavares, Margie Joseph and The Jackson Sisters.

Bristol's main market was in Europe by the early 1980s. His duet with Amii Stewart on a medley of "My Guy - My Girl" reached #39 in the UK Singles Chart in 1980.[4] A deal for Ariola/Hansa saw him score with club hits "Love No Longer Has a Hold on Me" and "Take Me Down". An accompanying album failed to consolidate his status, and it would be eight years before new product by Bristol appeared, with a 12" single "I'm Just a Musician" for Hansa. An affiliation in 1989 with the UK record label Motorcity Records was brief,[2] but did result in one of Bristol's most popular releases, "Man Up in the Sky",[1] and a cover of the Bristol-penned "What Does it Take to Win Your Love", originally a hit for Jr. Walker & the All Stars.

Bristol's last releases were a 12" single in 1991 for Whichway Records, "Come to Me", and an album, Life & Love, released for the Japanese market in 1993. The latter included Earth, Wind & Fire's "That's The Way I Feel About You" as a duet with his daughter, Shanna J. Bristol. The album received a US release three years later under the title Come To Me.

A comprehensive article on his career is contained in issue 51 of the music magazine, In The Basement.[6]

Bristol was inducted into the North Carolina Music Hall of Fame in 2009.[7]

This article uses material from the article Johnny Bristol from the free encyclopedia Wikipedia and it is licensed under the GNU Free Documentation License.