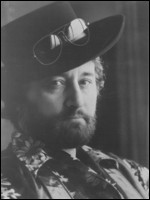 Not to be confused with Tom Glazer.

Glaser was born in Spalding, Nebraska, the son of Alice Harriet Marie (née Davis) and Louis Nicholas Glaser.[1][2][3] He was raised on a farm. Active since the 1950s, he recorded as a solo artist and with his brothers Chuck and Jim in the trio Tompall & the Glaser Brothers.[1] Tompall Glaser's highest-charting solo single was Shel Silverstein's "Put Another Log on the Fire", which peaked at No. 21 on the Billboard Hot Country Singles (now Hot Country Songs) charts in 1975 and appeared with Willie Nelson, Waylon Jennings, and Jessi Colter on the album Wanted! The Outlaws.

This article uses material from the article Tompall Glaser from the free encyclopedia Wikipedia and it is licensed under the GNU Free Documentation License.

Franz Xaver Mozart Konzert für Klavier und Orchester Es-Dur op. 25
Update Required To play the media you will need to either update your browser to a recent version or update your Flash plugin.