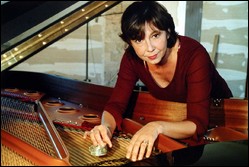 Born in Rome, Marcotulli is the daughter of a sound engineer who collaborated with Nino Rota and Ennio Morricone, among others. She started playing piano at five years old and graduated in classical music from the Santa Cecilia Conservatory.[1]

Marcotulli began her professional career in the early 1980s and made her first recording in 1984. Thanks to a series of prestigious collaborations, including Richard Galliano, Chet Baker, Enrico Rava, Kenny Wheeler, Peter Erskine, and Steve Grossman, in a few years she established herself as an important figure in the contemporary jazz scene.[2]

In 1987 Marcotulli was nominated for the Best Young Talent Award in the NPR Music Jazz Critics Poll.[2] In 1988 she toured in the U.S. and in Europe with Billy Cobham, also appearing in Cobham 's album Incoming.[1] In 1996 she duetted with Pat Metheny at the Sanremo Music Festival.[3] She has also had a long-term musical relationship with Dewey Redman.[2]

Also active as a composer of incidental music and musical scores for films, in 2010 Marcotulli won the David di Donatello for Best Score as well as the Ciak d'oro and the Nastro d'Argento in the same category for the score of Rocco Papaleo's Basilicata Coast to Coast.[5]

This article uses material from the article Rita Marcotulli from the free encyclopedia Wikipedia and it is licensed under the GNU Free Documentation License.

Antonio Salieri Sinfonia D-Dur "La Veneziana"
Update Required To play the media you will need to either update your browser to a recent version or update your Flash plugin.