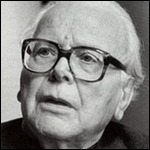 Erich Schmid was a Swiss composer and conductor. He was born on January 1, 1907 in Balsthal, Switzerland and died December 17, 2000 in Zürich. He studied composition with Bernhard Sekles at the Hoch Conservatory in Frankfurt und später mit Arnold Schönberg. Among many other international conducting roles, he was chief conductor of the Tonhalle Orchestra, Zürich from 1949 to 1957.

This article uses material from the article Erich Schmid from the free encyclopedia Wikipedia and it is licensed under the GNU Free Documentation License.