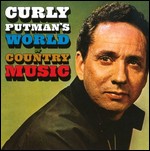 Putman was the son of a sawmill worker, and was raised on Putman Mountain in Alabama. He joined the Navy and spent four years on the aircraft carrier USS Valley Forge. Married Bernice Soon in 1956. Tried several jobs in different places in the late 1950s and early 60s, inspiring his later hit "My Elusive Dreams". Wrote his first big hit, "Green, Green Grass of Home," when working in Nashville plugging songs for Tree Records.

This article uses material from the article Curly Putman from the free encyclopedia Wikipedia and it is licensed under the GNU Free Documentation License.