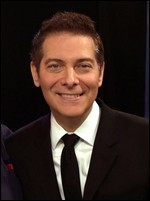 Michael Jay Feinstein[1] (born September 7, 1956) is an American singer, pianist, and music revivalist. He is an interpreter of, and an anthropologist and archivist for, the repertoire known as the Great American Songbook. In 1988 he won a Drama Desk Special Award for celebrating American musical theatre songs. Feinstein is also a multi-platinum-selling, five-time Grammy-nominated recording artist.[2] He currently serves as Artistic Director for The Center for the Performing Arts in Carmel, Indiana.[3]

Feinstein was born in Columbus, Ohio, the son of Florence Mazie (née Cohen), an amateur tap dancer, and Edward Feinstein, a sales executive for the Sara Lee Corporation and a former amateur singer.[1] At the age of five, he studied piano for a couple of months until his teacher became angered that he wasn't reading the sheet music she gave him, since he was more comfortable playing by ear. As his mother saw no problem with her son's method, she took him out of lessons and allowed him to enjoy music his own way.

After graduating from high school, Feinstein worked in local piano bars for two years, moving to Los Angeles when he was 20. Through the widow of legendary concert pianist-actor Oscar Levant, in 1977 he was introduced to Ira Gershwin, who hired him to catalogue his extensive collection of phonograph records. The assignment led to six years of researching, cataloguing and preserving the unpublished sheet music and rare recordings in Gershwin's home, thus securing the legacy of not just Ira but also that of his composer brother George Gershwin, who had died four decades earlier. Feinstein's extended tenure enabled him to also get to know Gershwin's next-door neighbor, singer Rosemary Clooney, with whom Feinstein formed an intensely close friendship lasting until Clooney's death. Feinstein served as musical consultant for the 1983 Broadway show My One and Only, a musical pastiche of Gershwin tunes.

By the mid-1980s, Feinstein was a nationally known cabaret singer-pianist famed for being a dedicated proponent of the Great American Songbook. In 1986, he recorded his first CD, Pure Gershwin (1987), a collection of music by George and Ira Gershwin. He followed this in quick succession with Live at the Algonquin (1986); Remember: Michael Feinstein Sings Irving Berlin (1987); Isn't It Romantic (1988), a collection of standards and his first album backed by an orchestra; and Over There (1989), featuring the music of America and Europe during the First World War. Feinstein recorded his only children's album, Pure Imagination, in 1992. In the 1987 episode "But Not For Me" of the TV series thirtysomething he sang But Not For Me, Love Is Here to Stay and Isn't It Romantic? as parts of dream sequences.

In the early 1990s, Feinstein embarked on an ambitious songbook project wherein he performed an album featuring the music of a featured composer, often accompanied by the composer. These included collaborations with Burton Lane (two volumes: 1990, 1992), Jule Styne (1991), Jerry Herman (Michael Feinstein Sings the Jerry Herman Songbook, 1993), Hugh Martin (1995), Jimmy Webb (Only One Life: The Songs of Jimmy Webb, 2003) and Jay Livingston/Ray Evans (2002). He has also recorded three albums of standards with Maynard Ferguson: Forever (1993), Such Sweet Sorrow (1995), and Big City Rhythms (1999).

In the late 1990s, Feinstein recorded two more albums of Gershwin music: Nice Work If You Can Get It: Songs by the Gershwins (1996) and Michael & George: Feinstein Sings Gershwin (1998). Feinstein's albums in the 21st century have included Romance on Film, Romance on Broadway (2000), Michael Feinstein with the Israel Philharmonic Orchestra (2001), Hopeless Romantics (2005, featuring George Shearing), and The Sinatra Project (2008).

In 2000, the Library of Congress appointed Feinstein to its newly formed National Recording Preservation Board, an organization dedicated to safeguarding Americas musical heritage.[5]

In 2008, the Michael Feinstein Great American Songbook Initiative [6] located its headquarters in Carmel, Indiana. The Initiative's two-fold mission includes the preservation, research, and exhibition of the physical artifacts, both published and non-published, of the Great American Songbook and educating today's youth about the music's relevance to their lives. The Initiative houses an archive and reference library; plans exist for a free-standing museum. The organization also holds an annual Great American Songbook Vocal Academy and Competition that invites high school students from around the country to compete in regional competitions. Finalists gather at the Initiative's headquarters for a vocal "boot camp" and final competition. The winner receives scholarship money and the opportunity to perform with Michael at his cabaret in New York.

In 2009 Feinstein became the artistic director of The Center for the Performing Arts.[7] located in Carmel, Indiana. Construction of the $170-million, three-theater venue was completed in January, 2011. The Center is home to an annual international arts festival, diverse live programming, and the Michael Feinstein Initiative.

In 2009, Feinstein teamed up with Cheyenne Jackson to create a nightclub act titled "The Power of Two". The show was hailed by the New York Times as "passionate," "impeccably harmonized" and "groundbreaking".[8] Variety acclaimed it as "dazzlingly entertaining".[9] Their act became one of the most critically acclaimed shows of 2009,[10][11][12] and the duo created a studio album from the material, The Power of Two.

In 2010, PBS aired Michael Feinstein's American Songbook, a three-part television documentary that depicts the history of the American popular song up to 1960, as well as Feinstein's own life and career.[13]

Feinstein is part owner of the Manhattan nightclub Feinstein's at the Regency, a showcase for cabaret performers.[14] He performs there for a sold-out Christmas holiday stint each year, and at other times as well. The club will be closing January 1, 2013, when the hotel closes for renovations. A new location for the club is yet to be announced. Feinstein was also a part owner of the now-closed Speakeasy Supper Club in Chicago.[15] Previously, he operated a Feinstein's club at the Hollywood Roosevelt Hotel. In 2008, he opened his own London venue, Feinstein's at the Shaw.[16]

Feinstein's memoir The Gershwins and Me: A Personal History in Twelve Songs about working for Ira Gershwin was published in the fall of 2012, accompanied by a CD of Feinstein performing the Gershwin brothers' music discussed in the book.[17]

Feinstein was a judge at the 2007 Miss America Pageant. In addition to doing more than 150 live performances per year, he has also appeared on a number of television series, documentaries, and talk shows. He also appeared on the children's show Xuxa in 1993.

As of June 2011, Feinstein has written the score for two new stage musicals, The Night They Saved Macys Parade and The Gold Room. He is working with MGM to turn The Thomas Crown Affair into a Broadway musical. He is also scoring his second movie, The Big Valley.[2]

This article uses material from the article Michael Feinstein from the free encyclopedia Wikipedia and it is licensed under the GNU Free Documentation License.