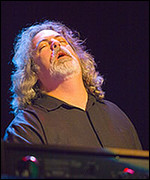 Dennis Drew (born on 8 August 1957 in Jamestown, New York, U.S.) is the keyboardist for the band 10,000 Maniacs.[1] He has been with the band since its inception in 1981 and is one of only two remaining founding members of the band. Drew is also general manager of WRFA-LP, a low-power nonprofit radio station in Jamestown, New York.

He is currently married to Kerry Drew and has two children, Emily and Dennis. He also has a dog named Jackson.

This article uses material from the article Dennis Drew from the free encyclopedia Wikipedia and it is licensed under the GNU Free Documentation License.