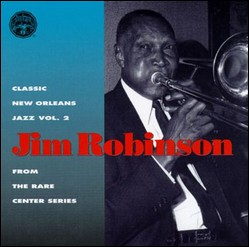 Jim Robinson, also known as Big Jim Robinson (December 25, 1892—May 4, 1976) was an American jazz musician, based in New Orleans, renowned for his deep, wide-toned, robust "tailgate" style of trombone playing, using the slide to achieve a wide swoop between two notes (a technique that classical musicians call "glissando") and rhythmic effects.

Born Nathan Robinson in Deer Range, a tiny settlement on the west bank of lower Plaquemines Parish, Louisiana, where he studied music under James Brown Humphrey. He arrived in New Orleans looking for work shortly before the Great Hurricane of 1915 which wiped out his home town of Deer Range, which prompted Robinson to settle in the city. [1] He was playing professionally in his twenties, from World War I on. In the 1920s he made his first recordings as a member of the Sam Morgan Jazz Band. He achieved gained greater fame with the resurgence of interest in early New Orleans jazz starting in the 1940s as a regular member of the bands of Bunk Johnson and George Lewis. Occasionally, he also led his own band and appeared regularly at Preservation Hall in his later years.

Robinson's widely recognized, individualistic sound was influential with many later traditional and New Orleans-style jazz trombonists in the United States and Europe. These included two protégés whom Robinson tutored personally—Frank Demond and Big Bill Bissonnette; Robinson's influence is more evident in the former.

Big Jim's signature tune, "Ice Cream", was requested at almost all personal appearances after his virtuoso performance of the number in an American Music Records recording made in the 1940s. He also was known for promoting audience participation—especially encouraging dancing whenever feasible.

Jim Robinson died of cancer at the New Orleans Touro Infirmary. Although he usually indicated his date of birth as Christmas Day 1892, no specific parish records are known to substantiate the exact day and year. In his May 5, 1976 obituary in The New York Times, his age is given as 86 without citing a source, suggesting the year of birth to be 1889 or 1890.

This article uses material from the article Jim Robinson (trombonist) from the free encyclopedia Wikipedia and it is licensed under the GNU Free Documentation License.