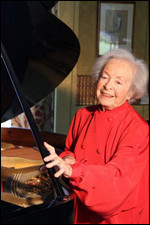 Born in Budapest, she began her studies with Margit Varró and Klára Máthé. Aged nine, she won the Grand Prix des Enfants Prodiges. Aged twelve she performed with an orchestra. She studied with Leó Weiner and Arnold Székely at the Franz Liszt Academy of Music, with Professor Robert Teichmüller at the Leipzig Conservatory, and with Paul Weingarten at the Vienna Conservatory, having left Hungary in 1946.

Rév has performed across Europe, in Asia, Africa, and in the United States. She has been soloist with conductors such as Sir Adrian Boult, André Cluytens, Jascha Horenstein, Eugen Jochum, Josef Krips, Rafael Kubelík, Hans Schmidt-Isserstedt, Constantin Silvestri and Walter Susskind.

Her first US appearance was in 1963 at the invitation of the Rockefeller Institute. Her recordings vary from complete Debussy Préludes, Chopin Nocturnes, and Mendelssohn Songs without Words. She turned 100 in July 2016.[1]

Rév lives in Paris, with her husband Pierre Aubé. She has won the Ferenc Liszt International Record Grand Prix.

Niccolò Paganini 3 Sonatinen für Signora de Lucca
Update Required To play the media you will need to either update your browser to a recent version or update your Flash plugin.