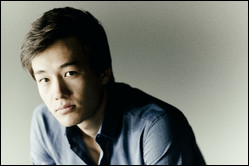 Louis Schwizgebel (born 19 November 1987) is a Swiss pianist. He studied piano with Franz Josefovski and Brigitte Meyer at the Lausanne Conservatory, Pascal Devoyon at Universität der Künste Berlin, Emanuel Ax at the Juilliard School, and Pascal Nemirovski at the Royal Academy of Music. He won 2nd prize at the Leeds International Piano Competition.

Schwizgebel has been the recipient of a number of prizes and scholarships, including second prize at the 2005 Concours de Genève,[1] First Prize at the 2007 Young Concert Artists European Auditions in Leipzig and the Young Concert Artists International Auditions in New York,[2] and 2nd prize at the 2012 Leeds International Piano Competition. He received a scholarship from Mozart-Gesellschaft Dortmund in 2013-2104,[3] and was a BBC Radio 3 New Generation Artist in 2013-2015.[4]

Henry Purcell Ouvertüre und Rondeau aus der Suite Abdelazer
Update Required To play the media you will need to either update your browser to a recent version or update your Flash plugin.