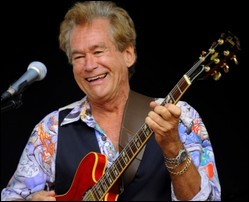 William Bradford "Bill" Champlin (born May 21, 1947, Oakland, California) is an American singer, guitarist, keyboard player, arranger, producer, and songwriter. His performance work is principally associated with the bands Chicago and the Sons of Champlin.[1] He has won multiple Grammy Awards for songwriting.

As a child, Champlin demonstrated a talent for piano, and eventually picked up the guitar after being inspired by Elvis Presley. He started a band, The Opposite Six, while at Tamalpais High School, in Mill Valley, California and went on to study music in college, but was encouraged by a professor to drop out of school and pursue music professionally.

The Sons of Champlin and solo career

The Opposite Six, Champlin's band from high school, changed their name to the Sons of Champlin, and eventually recorded a number of well-reviewed but poorly-selling albums (including Loosen Up Naturally and Circle Filled With Love) by 1977, when the 30 year old Champlin moved to Los Angeles.[2]

In LA he began extensive studio session work. He was especially in demand for his singing, appearing on hundreds of recordings throughout the 1970s and 1980s. The National Association of Recording Arts and Sciences (NARAS) awarded Champlin the Most Valuable Player peer award for male background vocalists in 1980.

In 1979, Champlin was approached by the then-widely successful band REO Speedwagon to add background vocals on some of their songs, which appear on the album Nine Lives; this was the last album in which REO Speedwagon had a predominately hard rock edge.

This work allowed Champlin to become acquainted with other in-demand session men such as Jay Graydon, David Foster, Steve Lukather (of Toto). Among other artists that he worked with were Al Jarreau, Boz Scaggs, The Tubes, Lee Ritenour, Amy Grant, and Nicky Trebek. He also appeared on Barry Manilow's 1982 EP, Oh, Julie!.

In 1997, Champlin revived the Sons of Champlin, with whom he continues to play live shows throughout the West Coast of the United States.

Since 2009 Champlin is collaborating also with the Italian-American composer, arranger, and producer Manuel De Peppe.

In the fall of 2011, Champlin played the B3 Hammond Organ on the songs "Moon Cry" and "Mississippi Creek" by Curt Campbell and the Eclectic Beast Band.

Also in 2011, Champlin teamed up with conductor Lars Erik Gudim and the Norwegian Radio Orchestra (KORK) in Oslo, Norway for a special performance aired December 27, 2011 on NRK TV in Norway.[3]

David Foster produced two solo albums for Champlin: Single (1978) and Runaway (1981). Both albums sold poorly due to poor promotion by his record company, although the latter album did include a pair of minor hits on the Billboard Hot 100 ("Sara" and "Tonight, Tonight"). In the 1990s, Champlin released five more solo albums: No Wasted Moments, Burn Down the Night, Through It All, He Started to Sing, and Mayday. The last was a live recording of songs from his career, and included musicians Greg Mathieson, Jerry Lopez, Eddie Garcia, Tom Saviano and Rochon Westmoreland.

In September 2008, Champlin released a new solo album No Place Left To Fall and a companion DVD in Japan on JVC/Victor. The record was produced by Champlin and Mark Eddinger, and featured musicians Bruce Gaitsch, George Hawkins, Jr., Billy Ward, Tamara Champlin, Will Champlin, and Eddinger, with guest appearances by Steve Lukather, Peter Cetera, Michael English, Jerry Lopez and enlisted such songwriting greats as Jay Graydon, Andreas Carlsson, Diane Warren, Michael Caruso and Dennis Matkosky. The record was released in Europe by Zinc Music in December 2008 and in the U.S. by DreamMakers Music in August 2009.

In 1978 the day after Chicago guitarist Terry Kath died, Champlin received a call from someone connected to the group, suggesting that he audition to take Kath's place. Champlin turned down the offer, saying he could not fill that role. But in 1981, he collaborated with Chicago's drummer, Danny Seraphine, singing some backgrounds with Peter Cetera on a non-Chicago project.

Seraphine and Champlin co-wrote a few songs, and Champlin was invited to sing one song ("Sonny Think Twice") as a guest vocalist on what would eventually become Chicago 16. Champlin suggested to Seraphine that David Foster might be a good choice as a producer for Chicago at that time.

Seraphine began a campaign to get Champlin into the group, despite some obstacles, and Kenny Loggins personally called Champlin, saying, "What are you doing? Those guys are over!"). Reluctant at first, especially after hearing that he would be singing "Colour My World" ("I never really liked that one much"), Champlin finally said, "Why not? I'll give it a year", and joined the band in 1981. Champlin would be instrumental in the firing of Danny Seraphine a few years later.

In the meantime, he was the musical director for the television show Fridays and was featured singing several songs on 16, including "Bad Advice" and "Follow Me."

1984's Chicago 17 enhanced Champlin's presence in the group, when he wrote several songs ("Please Hold On" and "Remember the Feeling"), and sang (with Cetera) the hit single "Hard Habit to Break".

In 1988 Champlin's voice appeared prominently on several major hit singles: "Look Away", "I Don't Wanna Live Without Your Love", and "You're Not Alone" from Chicago 19. That year he also sang the theme to the television show In the Heat of the Night.

In 1990 Champlin wrote, produced, and sang lead on "Hearts in Trouble", a song for the movie soundtrack of Days of Thunder. Originally a solo song, the producers of the movie decided, for marketing purposes, that it be released under the name of Chicago; so the band's horn section added a brass arrangement to the track and subsequently it was released as a single. In the summer of 1990, Chicago launched their Hearts in Trouble Tour.

By the early 1990s, Chicago's popularity began to wane (Chicago Twenty 1, featuring the Champlin-sung hit "Chasin' the Wind", sold poorly), and the band recorded Stone of Sisyphus, a project that remained unreleased until June 17, 2008, fifteen years after it was recorded. Champlin sings on the tracks "Mah Jongg", "Cry for The Lost", "The Show Must Go On", and "Plaid."

Champlin made major contributions to Chicago's big-band tribute Night & Day Big Band in 1995, and to both editions of their Christmas album (Chicago XXV: The Christmas Album, re-released with additional tracks as What's It Gonna Be, Santa?).

In 2008 one week after the U.S. release of the Champlin solo album No Place Left to Fall, Chicago and Champlin announced he would be departing from the group, which he did mid tour as Chicago were on summer tour with powerhouse band Earth Wind and Fire. Chicago's management released a statement saying "Bill Champlin is no longer in Chicago. He was a long time band member and we wish him all the best as he embarks on his new solo project, for which hes worked long and hard." Meanwhile, Champlin's publicist released a statement saying, "After 28 years with Chicago, singer-songwriter-keyboardist Bill Champlin is parting ways with the classic jazz/rock band to focus once again on his solo career."

As of 2010, Champlin resides in Nashville, Tennessee. Champlin has been married since 1982 to his second wife, singer/songwriter Tamara Champlin.[4][5] The couple's only child, Will Champlin, graduated from the Berklee College of Music in Boston, Massachusetts [6] and is pursuing a career as a musician. Will appeared as a contestant on Season 5 of NBC's reality TV singing competition The Voice on October 1, 2013, selecting Adam Levine as his coach and finishing in 3rd place.[7] Champlin is also the father of two other children, born prior to his second marriage.