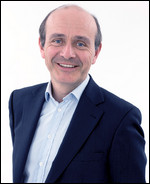 Gabor Takács-Nagy (born 17 April 1956,[1] Budapest, Hungary) is a Hungarian violinist and conductor. He began violin studies at age 8. He attended the Franz Liszt Academy of Music, where he was a winner of the Jenő Hubay prize. His teachers at the Liszt Academy included Ferenc Rados, András Mihály, and György Kurtág.

In 1975, Takács-Nagy, Károly Schranz, Gabor Ormai and András Fejér founded the Takács Quartet. The quartet recorded for the Hungaroton and Decca labels. Takács-Nagy left the ensemble in 1992, after he had developed hand stress, which forced him to stop playing the violin, and personal tensions arose within the quartet after their emigration from Hungary to the United States. Following his departure from the quartet, he underwent musical therapy and resumed playing the violin.[2]

In 1996, Takács-Nagy founded the Takács Piano Trio with Dénes Várjon (piano) and Péter Szabo (cello). He also became concertmaster of the Budapest Festival Orchestra.[2] In 1997, he joined the faculty of the Conservatoire de Musique de Genève as Professor of String Quartet. In 1998, he established the Mikrokosmos String Quartet with Zoltán Tuska (second violin), Sándor Papp (viola) and Miklós Perényi (cello).

Takács-Nagy also began to develop an interest in conducting. In 2005, he formed the string orchestra Camerata Bellerive, as a resident ensemble at the Festival de Bellerive in Geneva, where he has served as co-artistic director. In 2007, he became Music Director of the Verbier Festival Chamber Orchestra, as well as principal guest conductor of the Hungarian State Symphony and of the MÁV Symphony Orchestra. In September 2010, he became chief conductor and artistic director of the MÁV Symphony Orchestra. He became principal guest conductor of the Budapest Festival Orchestra effective with the 2012-2013 season.[3]

In March 2010, the Manchester Camerata announced the appointment of Takács-Nagy as its fifth principal conductor, effective with the 2011-2012 season, with an initial contract of 3 years, leading 12 concerts per year.[4][5] He has recorded with the Manchester Camerata commercially for the Avie label.[6] He became a principal artistic partner of the Irish Chamber Orchestra in January 2013.

Takács-Nagy has held the International Chair in Chamber Music at the Royal Northern College of Music. He married Lesley de Senger (née Townson), a native of Burnley, in 1991. They have two daughters.[1]

Johann Joseph Fux Suite "Turcaria"
Update Required To play the media you will need to either update your browser to a recent version or update your Flash plugin.