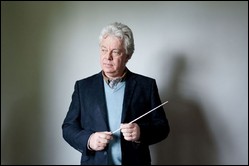 Christopher Warren-Green (born 30 July 1955) is a British violinist and conductor. He was born in Gloucestershire and attended Westminster City School, where he was a chorister,[1] and later the Royal Academy of Music.[2]

Warren-Green has served as concertmaster of the Philharmonia Orchestra.[3] Warren-Green has held the position of Music Director of the London Chamber Orchestra (LCO) since 1988. In 2005, Vladimir Ashkenazy invited Warren-Green and the LCO to Hong Kong as the resident orchestra for the Hong Kong International Piano Competition. On the personal invitation of the Prince of Wales, Warren-Green was invited to arrange the music and conduct the Philharmonia Orchestra for the Service of Dedication and Prayer celebrating the marriage of the Prince of Wales and the Duchess of Cornwall. To mark the occasion of the Queen's 80th birthday at Kew Palace, he conducted a private concert for the entire Royal family.[4]

Warren-Green has recorded for BMG, EMI, Philips, Virgin, Warner Classics.,[8] Chandos and Deutsche Grammophon. In July 2007, he conducted the premiere of Nigel Hess's Concerto for Piano and Orchestra, commissioned by the Prince of Wales in memory of his grandmother, with soloist Lang Lang. He conducted the London Chamber Orchestra at the April 2011 wedding of the Duke and Duchess of Cambridge before a worldwide television audience.

In August 2008 Warren-Green appeared in the reality TV talent show-themed television series, Maestro on BBC Two, as a mentor to Jane Asher, one of the students.[6]

Warren-Green is married to Rosemary Furniss, a violinist, and artistic director and concertmaster of the LCO. They have three children and three stepchildren.[9]

Hector Berlioz Rêverie et Caprice op.8
Update Required To play the media you will need to either update your browser to a recent version or update your Flash plugin.