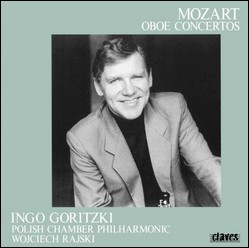 Ingo Goritzki (born 22 February 1939 in Berlin, Germany)[1] is a German oboist, pianist, and flautist.[2][3] He began his flute and piano studies in Freiburg, and switched to oboe as his primary instrument at age 20.

Goritzki plays both the modern oboe and the Baroque oboe, and has also played the cor anglais and heckelphone. He studied with Helmut Winschermann in Detmold and he had a long chamber music partnership with Pablo Casals and Sandor Vegh in Paris. He won prizes at national and international competitions in Birmingham, Prague, and Geneva. He was Principal Oboe at the Sinfonieorchester Basel (Switzerland) and Radio Frankfurt am Main.

François-Joseph Gossec Sinfonia in re minore, op.4/6
Update Required To play the media you will need to either update your browser to a recent version or update your Flash plugin.