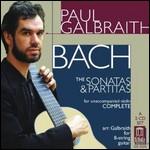 Paul Galbraith (born March 18, 1964) is a Scottish classical guitarist known for his unique style of playing.

Galbraith's unique playing position was first revealed at the Edinburgh Festival in 1989. His guitar (designed in collaboration with the late luthier David Rubio) is supported by a metal endpin, similar to that of a cello, that rests on a wooden resonance box. The instrument has two extra strings, in addition to those of a normal six-string guitar, one high and one low.

Galbraith's CDs on the Delos label are the Bach Lute Suites, Paul Galbraith Plays Haydn (featuring Galbraith's arrangements of four keyboard sonatas), and "In Every Lake the Moon Shines Full"-folk tunes from many countries. Most recently, a CD of arrangements of piano music by Debussy and Ravel. Paul Galbraith's double CD of the Complete Solo Bach Violin Sonatas and Partitas (DE 3232) was nominated for a 1998 Grammy Award in the category of Best Solo Instrumental Album. This recording was also chosen as one of the two best CDs of 1998 by Gramophone Magazine, which called it "a landmark in the history of guitar recordings." This recording received a four star rating in Stereo Review, and reached the top 10 on the classical charts in Billboard Magazine.

Recent orchestral engagements in the U.S. include concertos with the Indianapolis Chamber Orchestra, Knoxville Symphony, Santa Rosa Symphony and ProMusica Chamber Orchestra, among others. Galbraith and the St. Petersburg String Quartet gave the World Premiere in March 2003 at Stanford University of a new work, "Rhapsody for Guitar and String Quartet," that they co-commissioned from the acclaimed Georgian composer Zurab Nadarejshvili.

Galbraith has lived in Malawi, Greece, London, and, for the last ten years, Brazil. He was a founding member of the Brazilian Guitar Quartet, playing with them until summer of 2003. His principal teacher, since 1983, has been the Greek conductor, pianist and philosopher George Hadjinikos. Galbraith has lived in Brazil with his lutenist wife Celia, and their daughter Luiza since 1996.

Joseph Haydn Sinfonia n. 39 in sol minore
Update Required To play the media you will need to either update your browser to a recent version or update your Flash plugin.