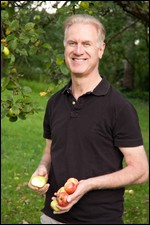 Poppen was born in Münster. As a violinist, he was awarded first prize in the Kocian Violin Competition age 14. He studied the violin with Kurt Schäffer at the Robert Schumann Hochschule, later with Oskar Schumsky, Nathan Milstein, and Joseph Gingold.[1]

In 1978, Poppen founded the Cherubini Quartet, winning in 1981 at the international string quartet competition in Evian. He was the conductor of the chamber orchestra Detmolder Kammerorchester from 1989 to 1995.[1] He then succeeded Hans Stadlmair as the conductor and artistic director of the Münchener Kammerorchester. In collaboration with ECM he recorded with the orchestra contemporary music of composers such as Karl Amadeus Hartmann, Tigran Mansurian, Anton Webern, Sofia Gubaidulina, Giacinto Scelsi, Valentin Silvestrov[2] and Barry Guy.[3] As a violinist, he recorded in 2000 works of Johann Sebastian Bach with the Hilliard Ensemble. The title Morimur (We shall die) stands for a juxtaposition of Bach's Partita for Violin No. 2, which is related to Easter according to scholar Helga Thoene, and interspersed chorales, some from his cantatas and Passions. The Partita's final Ciaconna is performed twice, once with the chorale which Bach may have had in mind, along with the violin music. The recording was described as

... one of those increasingly rare things – a moving and intelligently programmed disc that is effective from beginning to end.[4]

Poppen was the artistic director of the ARD International Music Competition from 2000 to 2005.[5] He is also Hong Kong Sinfonietta's Principal Guest Conductor starting from 2015. [6]

In 2012-13 Poppen taught at the DO School in Hamburg as part of a Fellowship program for young social entrepreneurs.[7] He worked with the Fellows to produce a multicultural concert involving local youth groups, and currently remains involved with the program in role of an advisor. [8]

Bartolomeo Campagnoli 1er mouvement du concerto pour flûte et orchestre en ré majeur op. 3 No 2
Update Required To play the media you will need to either update your browser to a recent version or update your Flash plugin.