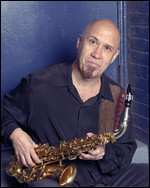 Slagle was born in Los Angeles and grew up in suburban Philadelphia. He received a scholarship to the Berklee College of Music and received a Masters degree in Music From Manhattan School of Music.. He came to New York in 1976, first working with Machito and his Afro-Cuban orchestra, and then toured and recorded with Ray Barretto, Steve Kuhn, Lionel Hampton, Brother Jack McDuff, and Carla Bley. He also performed and traveled with Woody Herman and Cab Calloway. In the mid-1980s, he began leading his own combos, first with Mike Stern and then with Dave Stryker; the combo is currently the main focus of Slagle's music.[1] He has also played frequently with Joe Lovano and has featured on several of Lovano's albums, including the Grammy-winning 52nd Street Themes.

In the mid-1980s, global and especially Latin influences began to inflect Slagle's work, and he appeared on albums by Milton Nascimento and Olivier Hutman. He toured frequently worldwide during the 1990s and 2000s. especially in Western Europe, Japan, and, latterly, Russia and Bulgaria. During the 1990s, he was a leading figure in the Charles Mingus Big Band. Ever since the late 1990s, Slagle has co-led a band with guitarist Dave Stryker. New New York, his 2000 release, has been seen as an evocation of the city's mood on the verge of 9/11 and an expression of Slagle's love for the city he has made his home. He has played with such diverse artists as Milton Nascimento, St. Vincent, Elvis Costello, the Beastie Boys, and Mac Rebennack (aka Dr. John). m Slagle has taught at the Manhattan School of Music, Rutgers, The New School, NYU, and clinics through the Thelonious Monk Institute as well as the Mingus Jazz Workshop and other workshops and educational initiatives.

In 2011, Slagle published a composition and improvisation workbook for the creative musician, and stories about his life in "Scenes, Songs and Solos" (Schaffner Press)(([2]

With the Beastie Boys