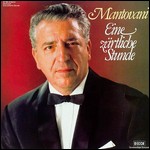 Annunzio Paolo Mantovani (Italian pronunciation: [annuntsio paolo mantovani]) (15 November 190529 March 1980)[1] known as Mantovani, was an Anglo-Italian conductor and light orchestra-styled entertainer with a cascading strings musical signature. The book British Hit Singles & Albums states that he was "Britain's most successful album act before The Beatles ... the first act to sell over one million stereo albums and had six albums simultaneously in the US Top 30 in 1959".[2]

Mantovani was born in Venice, Italy, into a musical family. His father, Bismarck, served as the concertmaster of La Scala opera house's orchestra in Milan, under the baton of Arturo Toscanini. The family moved to England in 1912, where young Annunzio studied at Trinity College of Music in London. After graduation, he formed his own orchestra, which played in and around Birmingham. He married Winifred Moss in 1934, and they had two children: Kenneth (born 12 July 1935) and Paula Irene (born 11 April 1939). By the time World War II broke out, his orchestra was one of the most popular British dance bands, both on BBC radio broadcasts and in live performances.[3]

He was also musical director for a large number of musicals and other plays, including Noël Coward's Pacific 1860 (1946) and Vivian Ellis's musical setting of J. B. Fagan's And So to Bed (1951).[4] After the war, he concentrated on recording, and eventually gave up live performance altogether. He worked with arranger and composer Ronnie Binge, who developed the "cascading strings" effect (also known as the "Mantovani sound").[5] His records were regularly used for demonstration purposes in stores selling hi-fi stereo equipment, as they were produced and arranged for stereo reproduction. He became the first person to sell a million stereophonic records.[6] In 1952, Binge ceased to arrange for Mantovani but the distinctive sound of the orchestra remained.

Similarly, Mantovani Plays Music From 'Exodus' and Other Great Themes made it to the Top Ten in 1961, with over one million albums sold.[4]

In 1958, Mantovani and his family bought a holiday home in Bournemouth in Durley Chine Road, and then in 1961 acquired a new property in Burton Road (now part of Poole). He moved, finally, to a new home in Martello Road in Poole.

Mantovani starred in his own syndicated television series, Mantovani, which was produced in England and which aired in the United States in 1959. Thirty-nine episodes were filmed.[7]

Mantovani made his last recordings in the mid-1970s.[8] He died at a care home in Tunbridge Wells, Kent,[1] and was cremated on 8 April 1980. His ashes are interred at Kent and Sussex Cemetery and Crematorium, Tunbridge Wells.[9]

The cascading strings technique developed by Binge became Mantovani's hallmark in such hits arranged by Binge as "Charmaine". Binge developed this technique to replicate the echo experienced in venues such as cathedrals and he achieved this goal through arranging skill alone.

Author Joseph Lanza describes Mantovani's string arrangements as the most "rich and mellifluous" of the emerging light music style during the early 1950s. He stated that Mantovani was a leader in the use of new studio technologies to "create sound tapestries with innumerable strings", and that "the sustained hum of Mantovani's reverberated violins produced a sonic vaporizer foreshadowing the synthesizer harmonics of space music."[10] His style survived through an ever-changing variety of musical styles prompting Variety to call him "the biggest musical phenomenon of the twentieth century".[11]

Mantovani is referred to by name in The Kinks song "Prince of the Punks". He also had a big influence on Brian May, Queen guitarist.[12]

He is also mentioned in the song "Paradise Place" by Siouxsie and the Banshees and in the song "Nainen tanssii tangoa" by the Finnish rock band CMX.

During his lifetime, Mantovani did not always get respect from his fellow musicians. When George Martin first suggested overdubbing Paul McCartney's recording of Yesterday with strings, McCartney's initial reaction, according to Martin, was that he didn't want it sounding like Mantovani.[13] Martin therefore used a more classical sound, employing a string quartet.

Much of his catalogue has reappeared on CD. There are also many compilations. A large number of CDs are available containing unauthorized recordings, billed as Mantovani or Mantovani Orchestra, for example the CD entitled "The Mantovani Orchestra" released in 1997[14] contained a track from the 1980s [Andrew Lloyd Webber] musical "Cats" which would have required posthumous conducting on the part of Mantovani. There have also been CDs released under the Mantovani name of recordings made by others while Mantovani was still alive.