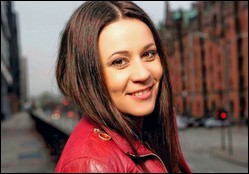 She received her first piano education at the age of five from her parents, professors at Kazan Academy of Music. In 1979 she performed her first public concert. From that year onwards she studied at further renowned piano schools and with famous piano tutors. In 1990 she relocated together with her parents to Germany in order to study at the Hochschule für Musik with Ludwig Hoffmann in Munich. Anna Gourari quickly gained renown by winning important competitions:

This last prize marked the beginning of her international acceptance. As of that year, Gourari has played a significant role on the international concert scene. She often performs together with leading orchestras under conductors such as Lorin Maazel, Zubin Mehta, etc.

In 2001 she played a star role in Werner Herzog's movie Invincible.

Gourari is regarded as unconventional; her playing involves a mystical approach, but is most notably very accurate.

2007 she made six reportages about Moscow's current art and society for "Deutsche Welle TV".

Anna Gourari has a daughter and lives with her family in Munich.

Ludwig van Beethoven Adagio du Trio avec piano en si bémol majeur, op. 11
Update Required To play the media you will need to either update your browser to a recent version or update your Flash plugin.