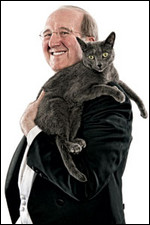 Lambert Orkis (born 1946, Philadelphia) is a United States-based pianist of classical music. He excels - among other points - by a particular many-sidedness: on the one hand, he has acted since 1988 as the performance partner of Anne-Sophie Mutter in their concerts of piano and violin chamber music (mainly containing sonatas for violin and piano by Beethoven, Mozart, Brahms, and Schubert). For the interpretation of the complete collection of Beethoven's and Mozart's violin sonatas the artist duo was honored by a German Grammy rsp. by a French "choc de lannée".

On the other hand, for eleven years he collaborated with the famous cellist (and conductor) Mstislav Rostropovich on all of the chamber music recitals that he was a part of. Rostropovich even created a fixed position for Orkis, appointing him as first piano instrumentalist member of the National Symphony Orchestra, during his time as a chief conductor of that orchestra at Washington, D.C.

A third speciality of Lambert Orkis are performances on instruments of the period considered in the concert program. On the other hand, he is a specialist in contemporary music. In this connection he cooperated with the cellists Lynn Harrell, Anner Bylsma and Daniel Müller-Schott, as well as with the violinists Julian Rachlin and Jaap Schroeder.

Lambert Orkis is Professor of piano of the Esther Boyer College at the Temple University in Philadelphia.

Johann Strauss "Le beau Danube bleu". Valse op. 314
Update Required To play the media you will need to either update your browser to a recent version or update your Flash plugin.