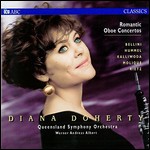 Diana Doherty was born in Brisbane, where she began her education. She attended Brisbane State High School. She studied both piano and oboe at the Queensland Conservatorium of Music before completing her Bachelor of Arts in Music Performance at the Victorian College of the Arts in Melbourne, from where she was awarded the M.E.N.S.A prize for the top graduating student. In 1985 she was a prize winner in the ABC Symphony Australia Young Performers Awards.

She has studied in Zürich with Thomas Indermuhle and also taken courses with Maurice Bourgue.

Diana Doherty has performed regularly as a soloist, with performances at various international festivals: the Prague Spring Festival; the MusicaRiva festival in Italy; Bratislava Music Festival; the Young Artist in Concert Festival in Davos, Switzerland.

She has toured extensively within the United States, giving recitals and masterclasses, as well as performing in the Chamber Music series at the Spoleto Festival USA in Charleston, South Carolina, and a concerto performance at the Lincoln Center for the Performing Arts.

She premiered Ross Edwards' Oboe Concerto in 2002, under the baton of Lorin Maazel. This unusual work includes choreography for the oboist-cum-dancer. Maazel invited her to play and dance it with the New York Philharmonic in 2005, and Doherty has since become particularly associated with the concerto.

In 2001 Diana Doherty won the Australian Entertainment Mo Award for Classical/Opera performer of the year, and in 2003 received the APRA Australian Music Centre award for best performance of an Australian work.

Felix Mendelssohn-Bartholdy Concerto pour violon et orchestre à cordes en ré mineur
Update Required To play the media you will need to either update your browser to a recent version or update your Flash plugin.