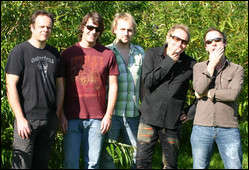 Cutting Crew are an English rock band formed in London in 1985. They are best remembered for their debut album Broadcast and hit singles, "(I Just) Died in Your Arms", "I've Been in Love Before", "One for the Mockingbird", and "Everything But My Pride".

While still in his teens, Nick Van Eede (born Nicholas Eede) recorded a few UK solo singles in the late 1970s, and later was in the band The Drivers, which found success in Canada, particularly with their 1982 single "Tears On Your Anorak". While touring Canada, The Drivers had a support band called Fast Forward, whose line up included guitarist Kevin Macmichael. Van Eede was so impressed with Macmichael's guitar playing that he asked him to form a new band with him. The Drivers split in 1983, but Van Eede and Macmichael joined forces in 1985 by relocating to London, England. Initially, the two made demos that led to a recording contract, before bassist Colin Farley and drummer Martin Beedle joined in 1986.[3]

Their first album, Broadcast, was released on Virgin Records in 1986. Although Virgin Records was already a major label in the UK, their debut song, "(I Just) Died in Your Arms", provided the first US hit for Virgin as a full-fledged label. This song release quickly helped the band gain popularity. Virgin flew the band to New York City for initial recordings of the album, then to Australia to shoot music videos. The unknown band shot to No. 1 in the major US market, as well as smaller markets such as Canada and Norway, with their debut single. Their most popular single, it was a multiformat success in the US, where it also reached number four on the Hot Mainstream Rock Tracks chart, No. 24 on the Hot Adult Contemporary Tracks chart and —in an extended remix version— No. 37 on the Hot Dance/Club Play chart. The song peaked at No. 4 in another major market, the UK Singles Chart, as well as becoming a hit in the smaller Switzerland and South Africa markets. It went to No. 2 in Sweden and Ireland, and No. 9 in Austria.[4]

The choice for follow-up single in the UK had been "I've Been In Love Before", but that song spent only three weeks in the UK Top 40, peaking at No. 31. Their choice for follow-up single in the US was their third UK release, "One for the Mockingbird", but the song was a relative commercial disappointment on both sides of the Atlantic, just cracking the Top 40 of the Hot 100 at No. 38 and hitting No. 29 on the Mainstream Rock chart in the US, No. 47 in Canada and No. 52 in the UK Singles Chart.

The band took a chance on "I've Been in Love Before" again, this time with greater success. The song became Cutting Crew's second US Top 10 on the Hot 100, peaking at No. 9, and was their first major hit on the US Adult Contemporary chart, where it peaked at No. 2. This success prompted a UK re-release, and this time it spent five weeks in the UK Singles Chart Top 40, peaking at No. 24. The song failed to chart throughout most of Europe, but it peaked at No. 8 in Canada. Despite an unflattering review by Rolling Stone magazine, Cutting Crew received a Grammy nomination as the Best New Artist of 1987.

Disputes with management led to a long recording hiatus, which stalled the band's career momentum. Cutting Crew's second album, The Scattering,[5] was finally released in early 1989. Its lead single, "(Between a) Rock and a Hard Place", (CA 54, UK 66, U.S. 77) failed to reach the Top 40. Van Eede's vocal style, however, did score a sizable US Adult Contemporary hit with "Everything But My Pride." That song peaked at No. 4 and stayed in the top 50 for 22 weeks. It climbed to No. 72 on the Canadian pop charts, though it failed to hit the US Hot 100. The prophetically named "The Last Thing" scaled the AC charts as high as No. 17 in early 1990 and went to No. 90 on the Canadian chart, and has been their final chart hit to date. Although a video for the title track did air briefly in the UK and North America, The Scattering failed to chart.

Recorded at The Mill Studios in Cookham, Berkshire on the Thames and produced by Chris Neil. Farley and Beedle left the group in 1991 with no replacement, leaving only Eede and Macmichael on the group. Eede sang and played keys and Macmichael played all guitars (lead and bass). Standout tracks are Frigid as England written by Jeff Lowe, the plaintive Sweet Auburn and the darkly comic, Don't Let It Bring You Down.

The album spawned one single, If That's The Way You Want It. Neither the single nor the album itself charted. Within weeks of its release, Virgin Records was bought by EMI and the album became obsolete. A rare find these days and showcasing Nick and Kevin at their wry, ironic, tuneful best.[3]

The band broke up in 1993; shortly after the release of their Compus Mentus album. After the break-up, Macmichael joined forces with Robert Plant and played on his Fate of Nations album. On 31 December 2002, Macmichael died of lung cancer at the Queen Elizabeth II Health Sciences Centre in Halifax, Nova Scotia, at the age of 51.

The new band toured in Germany, Norway, the UK, Canada, Hungary, Switzerland and the USA with, amongst others, ABC, Berlin, Wang Chung, Supertramp, Level 42 and Midge Ure. In 2008, Cutting Crew signed a US deal with label Spectra Records.

In October 2015, Cutting Crew has released their fifth studio album, Add To Favourites. It features "Till The Money Run$ Out" which was released as the first single on 4th September 2015. The band line up now includes guitarists Gareth Moulton and Joolz Dunkley, bassist Nick Kay, keyboardist Jono Harrison, drummer Martyn Barker and the Blackjack Horns. The band embarked on a UK tour shortly after its release.

This article uses material from the article Cutting Crew from the free encyclopedia Wikipedia and it is licensed under the GNU Free Documentation License.