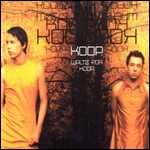 Koop is an electronic jazz duo from Sweden, consisting of Magnus Zingmark and Oscar Simonsson.[1]

Koop won a Swedish Grammy Award in 2003 for the album "Waltz for Koop", and received a Gold certification for sales of their most recent album, Koop Islands. Their orchestrated sound is achieved by slowly putting together thousands of small clips from records until the songs are ready, which helps explain the long time it takes to make a Koop album. Vocals have been provided by singers such as Ane Brun, Yukimi Nagano, Hilde Louise Asbjornsen, Rob Gallagher and Mikael Sundin.

This article uses material from the article Koop (band) from the free encyclopedia Wikipedia and it is licensed under the GNU Free Documentation License.