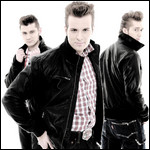 The Baseballs are a German rock and roll band founded in Berlin in 2007. They became popular with 1950s and 1960s style rock cover versions of modern hits such as "Umbrella" by Rihanna, "Crazy in Love" by Beyoncé Knowles, "Hot n Cold" by Katy Perry and "Call Me Maybe" by Carly Rae Jepsen. The band members are only credited by their nicknames (Sam, Digger and Basti).[1] Their version of "Umbrella" was a hit in Germany, Spain, the Netherlands, Belgium, Finland, Iceland, Austria, Switzerland, Sweden and Norway.[2][3][4][5][6]

The band re-released the album in 2010 as Strike! Back! The lead single is a rockabilly version of Snow Patrol's "Chasing Cars." The video features the band rocking a 1950s prom.[15]

In 2010 the band supported guitarist Jeff Beck on his "Emotion and Commotion" tour as his opening act.[19]

On 1 August 2011, the Baseballs released together with General Mills – the producer of the ice cream Häagen-Dazs – within an advertising campaign with Cosma Shiva Hagen a free download of the song "Wha Wha" – which was written especially for the campaign. The track is freely available and can be downloaded from the German site of the brand Häagen-Dazs.[20]

This article uses material from the article The Baseballs from the free encyclopedia Wikipedia and it is licensed under the GNU Free Documentation License.