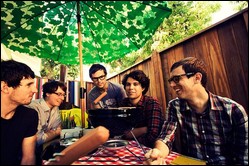 Hellogoodbye is a power pop band that was formed in Huntington Beach, California in 2001 by singer Forrest Kline. They were signed to Drive-Thru Records and released their first full-length album Zombies! Aliens! Vampires! Dinosaurs! in 2006, in addition to their previously released EP Hellogoodbye and DVD OMG HGB DVD ROTFL. In 2010, the band released Would It Kill You? on their label Wasted Summer Records.

Hellogoodbye started in 2001 as a recording project by Huntington Beach High School students Forrest Kline and Jesse Kurvink. With the interest only to entertain friends and woo crushes, Kline and Kurvink recorded some songs on Forrest's home computer. The first Hellogoodbye song ever written was Kurvink's "Bonnie Taylor Shakedown 2K1" which later appeared on their debut self-titled EP. With Kline's interest in web and graphic design, the unofficial group got a working title and a website and posted songs on MP3.com. As interest in the music grew, Kline recruited friends and chanced upon some opening slots at local shows.

In the first two years the group played local shows in Orange County at venues like Chain Reaction (Anaheim, California), The Hub (Fullerton, California), and Koo's Cafe (Long Beach, California), made a few trips to play in Arizona, and did one mini-tour through Arizona, New Mexico, and Texas with the band Peachcake. During this time they kept busy burning demos, screen printing tee-shirts and promoting via their website before signing to Drive-Thru Records in 2003.

After signing in 2003 Hellogoodbye released a self-titled EP on August 17, 2004, which has sold over 400,000 copies to date. The band began touring vigorously in support of this release in the United States and abroad. During the "Sounds of Change Tour" with An Angle, Socratic, and Steel Train, Hellogoodbye flipped and totalled their van and trailer after Cole dozed off behind the wheel while driving through Pennsylvania on October 22, 2004. None of the band's members were injured. An archive of the bands touring history is maintained at [1] and includes tours with The All-American Rejects, Motion City Soundtrack, and Panic! at the Disco.

While participating in the 2005 South by Southwest (SXSW), a music festival in Austin, Texas, the band appeared on several episodes of MTV's The Real World: Austin. The cast of the TV series produced a video documentary about three bands on the festival's line-up (the other two were Halifax and Enon), including interviews and live footage. The appearance gave a boost to the band's popularity.

On November 22, 2005 Hellogoodbye released a DVD titled OMG HGB DVD ROTFL. It featured two hours of concert and touring footage, as well as music videos to the five songs off their debut EP. Following the release, the group was featured on the third and fourth installments of the Drive-Thru Records DVD series. In December 2005, the band won MTV2's Dew Circuit Breakout.

On August 8, 2006, after two years of touring, Hellogoodbye released its first full length record, Zombies! Aliens! Vampires! Dinosaurs! produced by Matt Mahaffey through Drive-Thru Records. In 2006, Hellogoodbye appeared on the Vans Warped Tour, did a full headlining tour with Reggie and The Full Effect, Cute Is What We Aim For and Ozma, visited the UK (with The Plain White T's), Japan, and Europe. In 2007, they continued touring, doing a headlining tour with Boys Like Girls, a tour of Australia with Australian band The Lucksmiths, played the main stage of The Bamboozle in New Jersey, headlined the side stage at Give It a Name, played the Reading and Leeds Festivals as well as European festivals Pukklelpop, Rock en Sein, and the MySpace Music Tour (co-headlining with Say Anything).

In the January 2007 issue of Alternative Press, the group confirmed their new album will be released 2008. In January 2007, the single "Here (In Your Arms)" saw a resurgence on Top 40 radio and entered the Billboard Hot 100 (peaking at #14) and the Pop 100 (peaking at #9).[1] The single is now certified platinum. In the same month, they also appeared on The Late Late Show with Craig Ferguson, The Tonight Show with Jay Leno, and Last Call with Carson Daly. Their song "Oh, It is Love" became the theme song on MTV's Engaged and Underage. On March 13, 2007 they released an iTunes exclusive three-song EP, which features three different remixes of the song "All of Your Love." A few months later that year, the MTV movie Super Sweet 16 aired on television, featuring a live performance by Hellogoodbye of their song "All of Your Love."

In September 2008, it was announced that keyboardist Jesse Kurvink would be leaving the band to finish college. Replacing him would be Joe Marro, former guitarist/keyboardist of The Early November. In addition to the lineup changes, the band has announced a fall tour throughout the United States. Accompanying them on the tour are Never Shout Never, Say No More, Ace Enders, and PlayRadioPlay!.[2] In October 2008, it was announced on hellogoodbye's blog that drummer Chris Profeta would be leaving the band, and will be replaced by former Hellogoodbye drummer Aaron Flora.

On various websites, including their own, Hellogoodbye have said they've been working on a new record.[3][4] The name of the new album is titled "Would It Kill You?". The band paired up with Hanson starting on September 30 in Tulsa followed by dates in October and early November on what is called the "Use Your Sole Tour".[5] Other bands scheduled on the tour are Steel Train and Sherwood. On August 5, 2009, Hellogoodbye did a live stream of their new song "When We First Met" on absolutepunk.net.

Hellogoodbye was selected to perform at Boston's notorious CollegeFest event on September 26, 2009.

Recently, the band has begun to post new covers on their website, including a cover of "Happy Xmas (War is Over)" (originally by John Lennon) and "Do You Want To Know A Secret?" (originally by The Beatles). Kline has also said that some of the covers will be of 90's emo and mid 80s punk.

in early 2010, they went on tour with New Found Glory, Saves the Day, and Fireworks.

According to their twitter on February 25, 2010 they have officially parted ways with Drive-Thru Records. This ended an over year long lawsuit with the label which hindered a new album release that has already been written and recorded. Future releases will now be through their own label, Wasted Summer. The band is also running their own online merch store at hellagoodbuys.net. The new merch also features some homemade items from family and friends.[6]

A track from Hellogoodbye's second album was announced via their website. It was revealed to be called "Getting Old" and was featured on Would It Kill You?.

At a concert on September 10, 2010 Hellogoodbye performed two new tracks entitled "Coppertone" and "When We First Kissed." Would It Kill You? was released on November 9th, 2010. [7]

This article uses material from the article Hellogoodbye from the free encyclopedia Wikipedia and it is licensed under the GNU Free Documentation License.