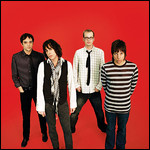 Fountains of Wayne is an American power pop band that formed in New York City in 1996. The members are Chris Collingwood, Adam Schlesinger, Jody Porter and Brian Young.

After Montclair, New Jersey-based Adam Schlesinger and Sellersville, Pennsylvania-based Chris Collingwood first met as freshmen at Williams College, they played music in various bands and eventually went their separate ways, with Collingwood forming the Mercy Buckets in Boston and Schlesinger forming Ivy in New York City. In the mid-1990s, they came together to form Fountains of Wayne, named after a lawn ornament store in Wayne, New Jersey, located at the intersection of U.S. Route 46 and New Jersey Route 23.[1] Previous band names included Woolly Mammoth, Are You My Mother? and Three Men Who When Standing Side by Side Have a Wingspan of Over Twelve Feet. Recruiting guitarist Jody Porter and still active Posies drummer Brian Young, the band cut a demo and signed with Atlantic Records.

In 1996, the band released its self-titled debut, which spawned the singles "Radiation Vibe" and "Sink to the Bottom" and, the band toured the world extensively behind their debut album, playing alongside bands such as The Smashing Pumpkins, Sloan and The Lemonheads. That same year, Schlesinger wrote the Academy Award-nominated, RIAA gold certified title song for the film That Thing You Do!.

In 1999, the band released Utopia Parkway, an album named after a road in Queens, New York. The album was a concept record that dealt with life in modern suburbia. Utopia Parkway was received well by critics, garnering many favorable reviews, and was album of the week in People magazine. The group once again toured extensively behind the album, but frustrations grew between the band and the label. The band was later dropped by Atlantic in late 1999.

The band was inactive for a period of time. Schlesinger co-wrote many of the songs for the Josie and the Pussycats film and soundtrack, produced albums for the Verve Pipe, David Mead and They Might Be Giants, and released a third record with his other band, Ivy. Collingwood formed and fronted a Northampton, Massachusetts-based pop-country band, called Gay Potatoes, and played a string of solo shows in the Boston and Los Angeles areas. Guitarist Jody Porter worked with his band, The Astrojet, alongside famed producer Gordon Raphael and keyboardist David Zhang in New York City. Percussionist Brian Young moved to Los Angeles and did session work for various artists such as producer Steve Fisk, Ivy, Heather Duby and Greg Dulli. The band reunited with their recording a cover of The Kinks' "Better Things" for the tribute album, This Is Where I Belong: Songs of Ray Davies and the Kinks, in 2001.

In 2003, the band released Welcome Interstate Managers, a successful album which spawned the Grammy-nominated RIAA gold-certified hit single, "Stacy's Mom", of which Adam Schlesinger says was a tribute to the band, The Cars; initially, the single stalled at commercial alternative radio in the US, but MTV President Judy McGrath championed the single's music video, a Fast Times at Ridgemont High homage featuring Rachel Hunter. Another song off the album, "All Kinds of Time", was used for NFL commercial promotions during the 2005 season.[2]

In 2005, the band released Out-of-State Plates, a collection of B-sides and two new songs, which was supported by the single "Maureen" and a limited US tour that included some acoustic-only sets, a set on PBS Soundstage, and American Songbook. Also included on the album is a 1999 cover of the Britney Spears hit, "...Baby One More Time".

In 2009, the band released No Better Place: Live In Chicago, a live concert DVD which included newly recorded acoustic songs.[4] Also that year, they played a short run of full-band acoustic shows where they showcased songs from their forthcoming album.[5] Also, on a sadder note that year, the store for which their band was named (seen also in The Sopranos episode, "Another Toothpick") went out of business.[6]

In 2011, the band released Sky Full of Holes, an album put out in Japan by Warner Music Japan (with two bonus tracks), Europe by Lojinx,[7] and the U.S. by Yep Roc Records.

Wikimedia Commons has media related to: Fountains of Wayne

This article uses material from the article Fountains of Wayne from the free encyclopedia Wikipedia and it is licensed under the GNU Free Documentation License.