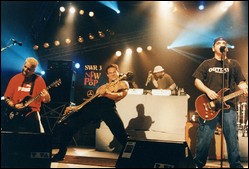 The Bloodhound Gang began as a small alternative band called Bang Chamber 8. It consisted of Jimmy Pop and Daddy Long Legs, both graduates of Perkiomen Valley High School. They released an eponymous tape before changing their name to the Bloodhound Gang, a reference to "The Bloodhound Gang", a segment on the 1980s PBS kids' show 3-2-1 Contact that featured three young detectives solving mysteries and fighting crime. Unable to book shows anywhere else, the Bloodhound Gang first performed an extra room at Evil Jared Hasselhoff's house, in exchange for Schlitz, Marlboros, and a chance to hand out their first demo tape, entitled Just Another Demo. When the floor caved in one night, they began performing every month at CBGBs in New York City. When asked about the band's tenure at the club, Jimmy Pop was quoted as saying, "I've seen cavemen with better clubs."[1][3]

In April 1994, the band released their second demo tape, The Original Motion Picture Soundtrack to Hitler's Handicapped Helpers. This resulted in a record deal with Cheese Factory Records.

In summer 1994, Jimmy Pop had a small role in the short independent film The Chick That Was Naked by independent filmmaker Kurt Fitzpatrick. Also, a song by the band was used on its soundtrack.[4]

In March 1995 the Bloodhound Gang signed a record deal with Columbia Records. They released their first full-length album, titled Use Your Fingers. They began touring around the United States. At this time Daddy Long Legs and M.S.G., who were angry with Columbia Records, left the band to form another rap group, Wolfpac. Bass player Evil Jared Hasselhoff and Turntablist Tard-E-Tard joined the group as replacements. When the tour ended, the deal with Columbia Records was dropped and band members Skip O'Pot2Mus and Tard-E-Tard left to pursue a career in the customer service industry.[1]

In March 1996, the band, complete with a new line-up, recorded their second full-length album, One Fierce Beer Coaster, first released on Cheese Factory Records (now Republic Records), and re-released on Geffen Records in 1998. The original release, designed by Michael Calleia at Industrial Strength Design in New York City, had an actual beer coaster as part of the packaging. They embarked on their first "real tour" of the United States and Europe. This album contained "Fire Water Burn". In the summer of 1996, Jimmy Pop had a supporting role in the independent film Kin by director and star Kurt Fitzpatrick. Several Bloodhound Gang songs were used for the soundtrack for the film. The single "Fire Water Burn" made number 4 on the Dutch Top 10.

On February 29, 2000, they released their third album, Hooray for Boobies. Powered by the hit single "The Bad Touch", they embarked on two more tours of Europe, where their popularity had increased dramatically ("The Bad Touch" and Hooray for Boobies reached #1 in Germany, where "Along Comes Mary" was also a Top 10 hit). They returned after selling over five million albums.[1]

The band's newest album, Hefty Fine, was released on September 13, 2005. The title came about after Evil Jared Hasselhoff was fined during work on MTV's "Viva La Bam" (The Scavenger Hunt episode). Jared was fined $10,000, which Jimmy Pop allegedly had to pay (This is discussed in the "Un-commentary" Of the Viva La Bam DVDs). Jimmy has stated that Jared was arrested after attempting to urinate into a dixie cup that he (Jim) was holding, from the top of a parking lot.[5] The CD's original title, Heavy Flow, was scrapped when it was noticed that fellow musician Moby had a song with the same name. The first single, "Foxtrot Uniform Charlie Kilo," gained heavy rotation on music video channels. Although the track "No Hard Feelings" recently broke into the Modern Rock Top 50, their second single "Uhn Tiss Uhn Tiss Uhn Tiss" (which is featured in a Blaupunkt, a BGL Grand Wizard ad) has started radio circulation with a music video airing limitedly on a few music channels. Other songs from the new album are part of a campaign by the Bloodhound Gang to change the Pennsylvania state anthem into their appropriately titled "Pennsylvania"[1], which is often incorrectly believed to be titled "Do You Even Know What a Wawa Is?", from that song's last stanza, as well as "Something Diabolical," featuring HIM's Ville Valo. The band's current members can also be found on a few episodes of Viva La Bam including the episode in which Bam Margera divides his friends into teams that go out and do outrageous stunts in order to earn points in a "scavenger hunt" to decide what happens to April Margera's piano that she wishes to get rid of. In Season Five, Jimmy and Jared also appear, ratifying 'The State of Bam' and are involved in a car race between Bam and Ryan Dunn. Bam Margera also makes a guest star appearance on their Hefty Fine album on a hidden track and in the music video for "Foxtrot Uniform Charlie Kilo."

The band has made several appearances on the MTV show Jackass, Viva La Bam, CKY4, as well as The Howard Stern Show.

In October 2008 Lupus Thunder quit the band; this was announced on a blog on the band's MySpace by bassist Evil Jared.[6]

The Bloodhound Gang played the 2009 Soundwave Festival.[7] in Australia.

Daniel P Carter from A has been confirmed as the new lead guitarist.

The gang has gained some more notoriety as the main topic on HD Theater Street Customs: Berlin's third episode. Since the band moved to Berlin in March 2006, they were a favorite to be on the show. The West Coast Customs crew rigged up and old Porsche 944 and an articulated bus for the band.

Geffen Records refused to release the song "Yellow Fever" due to its lyrical content about Asian women.[8] Examples of the lyrics from "Yellow Fever" include "like an oriental rug 'cause I lay her where I please, then I blindfold her with dental floss and get on my knees" and "Oh me Chinky, she's so kinky, got me hot like Nagasaki, burnin' up like napalm burstin' like an a-bomb."[9][10] In response, Jimmy Pop told Yahoo! Launch that the Gang's lyrical matter was not meant to be taken seriously.

The band arrived in the middle of a media storm mid-2006 when they started using a "golden shower" act onstage during a rendition of Depeche Mode's "Enjoy the Silence" at Rock Am Ring and Pinkpop.[11] On a Radio Bam show, Ant'nee (one of the band's crew members) mentioned in one of the Belgium shows, Evil Jared used feces instead of using urine as an alternate.[12] The band has been known to drink vomit during live performances.[13]

This article uses material from the article Bloodhound Gang from the free encyclopedia Wikipedia and it is licensed under the GNU Free Documentation License.